Reading Between the Lies 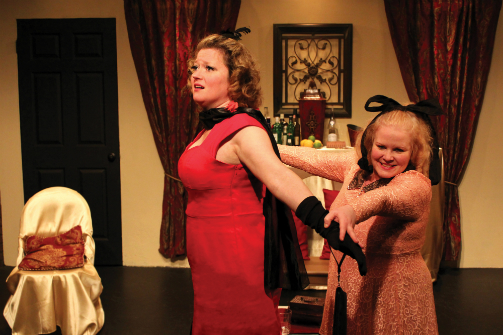 Kelly Barnett and Wende O'Reily in Reading Between the Lies. Photo by Schnele Wilson, Urban Topaz.

Reading Between the Lies is a play that plays with genre and gets it just right. It's the 1940s, and a troupe of theater eccentrics gets together for the first reading of a new Broadway play. The bitter wife (Teri Monahan) of the producer (Jerry Chapa), who gave up the stage in order to marry into his money, is throwing a fit before the guests arrive; the only thing that will soothe her is martini after martini. One by one, the cast of characters enters: the hardboiled theater director (Christopher Romero Wilson), the aging starlet (Kelly Barrett) who is also the ex-wife of the playwright (Omar Prince), the aspiring young male lead (Kurt Roediger) who blackmailed the producer to get the role, the playwright and his young and innocent fiance (Chelsea Clark), and finally, the unhinged former child star (played by the scenery-crunching Wende O’Reilly), and her nursemaid (Anna Wallace-Deering). There's also a detective (Carl Gibson). Old rivalries boil to the surface and the well-written barbs fly until someone dies at the end of the first act. In the second act the murder is solved after a number of well-structured and unexpected reversals, and all is well in the end.

The play, by Kelly Barrett, is extremely well-written and tightly structured; Barrett (who also plays the role of Gwen Blanche), has done a fantastic job with the genre. The witticisms escalate into over-the-top wacky comedy when O’Reilly enters the scene. I don’t want to give too much away, but you almost can’t believe an actress this perfect for the role exists, and she garners some huge laughs from the audience in response. For the most part, the rest of the cast is able to keep up with her. Overall, this is a highly satisfying, laugh-out-loud, event.