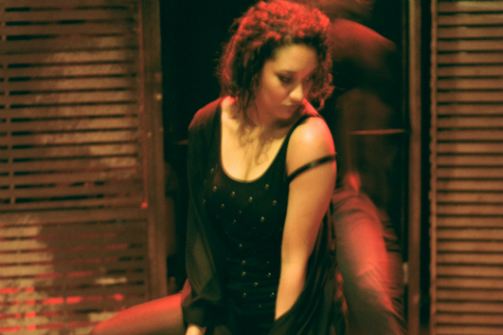 Christian Barnett and Joey English play original songs (and a great version of the old Tennessee Waltz) as the audience enters the theatre, carrying us seamlessly into the dirty south. They play a song called "Orpheus" and it feels like a caution to not get lost in the nightmare. The first scene opens with an adult Sarah (Kerri Koczen), our survivor, and her new boyfriend Sean (Rollin Prince) sitting in a bar drinking beer and innocently talking about Star Wars. The conversation rolls into how experienced she is in dating and sex. We see the pain on her face. Sarah’s initial dialogue flashes back to her being dropped off at age 5 to be babysat by her teenage cousin Nate (nicely played by Joseph Rebrovick) and his friends. What happens to her is a nightmare as she is raped by the three boys. This is the first of many rapes to come, with many boys.

By six, she is taken to a children’s brothel, where the victims are “aged out” and no longer desirable by age nine. In the home, she is broken by Head (Damon Boggess), the ringleader. Her first John (played by Barnett) is ruthless. Lady (played beautifully by Gabrielle Wedderburn) acts as a mother of sorts in the home, and explains to the audience how at 14, the black girls move into full prostitution on the streets.

This show is not for the light of heart in any way. Princess is the name given to Sarah in the child sex home, and it becomes her alter ego. The character Princess makes it possible for her to do her job. She starts out angry, and then gets used to the game. As Sarah matures, she is haunted by disorders resulting from her trauma: sleep terrors, flashbacks, inferiority complexes. Soon, Sarah grows older, and has aged out of the sex ring.

The cast throughout the piece asks the questions: What is a girl? What is a woman? Pondering the idea of having children, she is traumatized by memories of Head. By the end, Sarah is consumed with survivor's guilt. It was the crack of light under the door that she held onto, that hope of a future. She is alive, where others, many others, never made it out. She is one of the lucky ones.

It has taken some time for me to absorb this piece fully. I have taken this show very personally, as a southern born artist and mother of three girls. Sarah’s voice in this piece is powerful, and portrayed brilliantly and immeasurably by Koczen. Her future is bright as an actress of tremendous empathy and care with delicate characters. Her cries of anguish and pain were incredible in this heart-wrenching portrayal of a little girl, raped and tortured (worst of all by kin), in a cold community that turned a blind eye. She was one of many, nameless faces living this horror in a culture where this behavior is shockingly an unprosecuted norm.

Many of the scenes I wanted to turn away from, but Sarah's voice is a call to action. It is a voice that MUST be heard, by audiences, by the theatrical community, by the authorities, and by the world. It is so courageous for to tell this story.

Yellow Rose Productions has brilliantly created a piece filled with the agony and revelation, strife and courage that their subject shares. The immense corruption and deviance that exists in Sarah’s world must be forced into the public realm. The cast is excellent, talented, cohesive and very supportive, as they move through this horrific tale. They don’t break for a second. The audience becomes voyeur, a Greek chorus so to speak, in this haunting tale of abusive child violence masked by a veneer of social acceptance. The whole town seems to be in on it. Racism separates children abused and used by affluent men in the community, with the whites being cast aside at 14, and the blacks forced into prostitution rings. Neither can escape their trauma.

Want to be a part of the fight? Visit walkfree.org for more information and sign this petition to prevent youth trafficking.