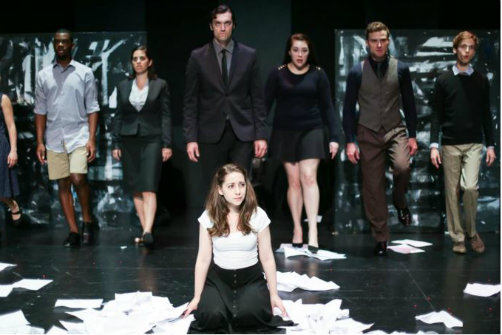 Jenny Vallancourt and the cast of Plath. Photo by Michael Discenza.

BOTTOM LINE: A messy take with some interesting moments that struggles to find perspective on a genius poet’s tragic life.

“I shut my eyes and all the world drops dead; / I lift my lids and all is born again. / (I think I made you up inside my head.)” So begins Sylvia Plath’s visceral and muscular “Mad Girl’s Love Song,” the most famous poem of the great American poet who, after a many-year battle with depression, stuck her head inside an oven and committed suicide at the age of thirty.

The musical Plath. (titled thus, with a period) begins with this poem as well, recited first by the actress playing Sylvia Plath, and then by the ensemble in a sort of messy canon, seeming to represent a myriad of voices inside her consciousness. This musical focuses on the early part of Plath’s years as a student at Smith College, which led up to her first suicide attempts. It’s a potentially fascinating subject, and in line with recent scholarship about Plath’s life and work—but in its brief 75 minutes, the musical struggles to find a clear direction or perspective on the titular character’s life and art.

In addition to the previously mentioned ensemble-as-chaotic voices motif, the musical also features extensive gestural choreography, a framing device that also turns out to be inside Plath’s head, moments of slow motion, and pages of text on walls that get additional words written on them with black markers over the course of the play, and are eventually torn and strewn about. Not to mention that this is a musical, and one featuring a variety of musical storytelling styles from almost Brechtian to 50s pastiche to rich, introspective musical theatre. It’s a lot for poor Sylvia to handle.

The words of Sylvia Plath are used extensively in Plath. and are unsurprisingly the strongest text in the piece. Given a bit more time to breathe, there could be some real richness and characterization there, and actress Jenny Vallancourt, in the titular role, seems game to explore the depths. But too often the powerful writing is obscured by one of the many theatrical devices at play in this production.

Least effective is the framing meta-story of Plath talking to a psychiatrist or analyst of some kind, an almost Mr. Hyde-like figure who is possibly the worst psychiatrist of all time, pushing Plath to reveal deeper and deeper truths while verbally abusing her—at one point, literally screaming, almost comically, “You need to calm down!” In her deep depression, Plath is clearly not able to cope with this. When the psychiatrist is revealed to be a figment of Plath’s imagination, I wondered—what are we to understand from this device? That Plath’s depression was self-inflicted?

This is not to say there are no merits to this production as well. Actor Michael Lorz, playing Plath’s younger brother, finds some great humor early in the play, and is wonderful in a late scene where he discovers his sister after a suicide attempt—the piece's most effective dramatic scene. Another strong moment that flirts with a real point of view is Plath’s internship at Mademoiselle magazine. The tough-but-interested editor (sung very well by Mara Jill Herman) tells Plath that she is gifted, and to beat the despair she feels working in fast-paced New York City, all she needs to do is pull herself up by her bootstraps. The contrast between the external world’s demands and Plath’s internal struggle comes into focus best in this scene. In addition, the score is well orchestrated by Solomon Hoffman, and the small orchestra sounds great. The production would do better to settle on a single musical style, and my vote is for the richer and more complex music that accompanies the more introspective moments, which is often quite winning.

What Plath. needs is a decision about how to focus the story. Is this about a great artist who struggled with an even greater illness? Is it about how the mental health system, particularly in the 1950s, let women down, even women of genius like Plath? Is it about how a powerful poet transformed her pain into a small but immortal canon in her brief life? Any of these could be a wonderful play, but some serious refocusing is needed to give the story of this brilliant woman the import it deserves.