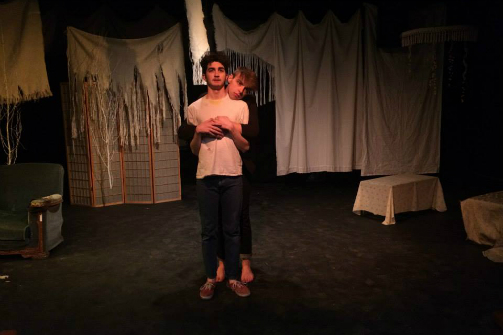 BOTTOM LINE: For a play that centers on one woman's suicide, O' Save Us St. Sophia manages to be full of playful imagination.

Although the plane of reality isn't always identifiable, in O' Save Us St. Sophia, the mood is crystal clear, thanks to a concise score and a simple set full of small surprises. Greg (Zak Kelly) tells us a tale in a novel way by looking back in time and, as a brief discussion of the underpinnings of a metaphysical flattening illustrates, across time as well. While the ontological concerns are quite serious, a rotating cast of alter egos delves into angst filled romps that provide just the right counterbalance.

Greg spends most of the play gathering the courage to process the passing of his college friend, Sophia (Sophie Parens). Kelley does a great job of conveying his struggle to force himself into battle with his inner demons. Sophia's name means wisdom, and she's joined by other women named faith, hope, and love.

All of these symbolic embodiments are woven into a clever, unpredictable script by playwright Mikey Craighead. There's fighting and bleeding and murder, but it's all in service to a conversation that Greg admits he needs to have with himself.

Every now and then a light rhythm creeps over a scene. Sometimes it's an ethereal progression, at others it's a warm baseline, and when Sophie has her mischievous, frisky stand-in step up to the plate, it's pure rock and roll.

The most physical fun is had by Kelley and actor Julian Thomas, who plays Greg's boyfriend. Seeing these two foist accountability on each other is one of the strong points in the script. And they remind us that just because men become lovers doesn't mean that they forget how to roughhouse. The women keep their composure, which is ironic since they're different sides of a woman who admits she has suffered a psychotic break. Costume-wise, the outlier is Shep, who goes shoeless for the entire play.

For a play that takes place entirely in someone's head, it's never claustrophobic. It's playful, youthful, and thought provoking. It captures the messiness of relationships and pays respect to the need for emotional reckoning. Not everyone knows how to lay down the dead, and it's worthwhile watching Greg find his way there.