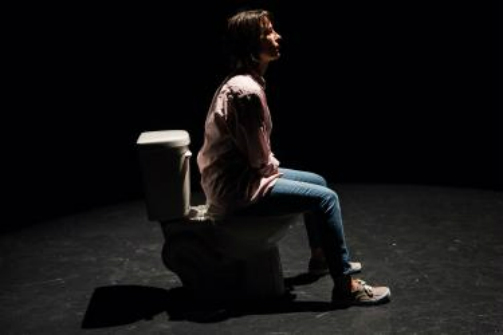 BOTTOM LINE: A woman decides to live in boyfriend’s bathroom for two years.

The bathroom. It’s not exactly a place where someone would choose to hang out. But for Gail (Jennifer Bareilles), it’s her new home. In Max Mondi’s Maybe Tomorrow, based on true events, Gail decides that she has had enough when it comes to dealing with life’s problems. To get away from it all, she decides to sit on the toilet, and literally, never get up. Her husband Ben (Harrison Unger) goes along with this plan, bringing her meals while she sits on the toilet. Day in, day out, she never moves. Ben keeps asking her “Can you come out?” to which she replies “Maybe tomorrow.”

After two years, Ben has had enough and decides to call in reinforcements. The police arrive at their door and forcibly remove Gail from the throne to take her to the hospital, finally getting her the help she so desperately needs. The question, though, is why did this go on so long?

While certainly on the more wacky side, Maybe Tomorrow is a portrayal of a person in crisis. And the fact that the show is based on actual events just adds another mysterious element. The play calls into question how one deals with their problems effectively. Do we just pretend they do not exist, or do we face them head on? For Gail, the bathroom was obviously a safe place away from everything that was happening in her life.

Seeing an actress sitting on a toilet with her pants down the entire show, I will admit, can be uncomfortable to watch. But that is the whole point of the show. While not quite easy to relate to, the show's message of taking the time to understand each other rings loud and clear. And helping bring this message home even further is the amazing duo of Bareilles and Unger. This show is sold out for its entire run and I suspect it has something to do with the cast. Their performances are honest and their chemistry is absolutely noticeable. The pair do a fantastic job humanizing the situation and actually making us care about them.

After this show I may never look at the bathroom the same way again, and I also may take the time to be a better listener.