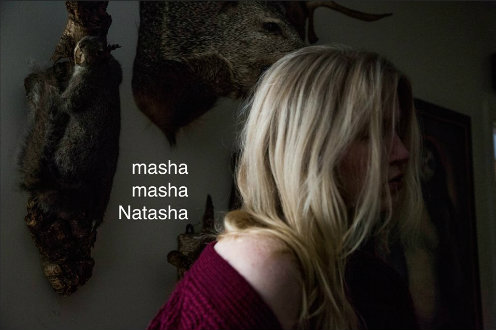 BOTTOM LINE: A hauntingly disturbing new play based on real-life events, mashed up with a hint of Chekhov.

Never did I expect to leave a Fringe show at four in the afternoon feeling as if I had walked through a psychological haunted house, dreading the dark thoughts that would emerge before bed. But y’all, that is indeed what happened, and I haven’t stopped thinking about it since. Carol Brown (playwright and actress) and Sarah Blush (director) have cooked up a sickeningly haunting experience based on events that took place in Spring 2014 in Waukesha, Wisconsin.

The play opens with Em (Jessica Frey) and Emmie (Morgan Everitt) in a dark cluttered basement, lit only by the cold light of cellphones on their faces and the faint flickering of candlelight on a makeshift shrine in the background. As soon as our eyes adjust to the darkness, a third figure named Toshie (Carol Brown) is seen tied up to a clothing rack, helplessly looking on. We find out that Em and Emmie are planning on killing Toshie to prove their worth, or act as a “proxy” to the Slender Man—an illusive entity who dwells on the outskirts of the internet and is rumored to have abducted and killed countless children.

The play is divided up into three parts with the first and third sections of the play taking place in the seemingly real world of Emmie’s basement as the girls dance around the murder of their friend. Sandwiched in between the two is a scene that departs from this grounded reality and takes us to “An Impossible Three Sisters.” During this section, Brown breaks all the rules and flips the entire piece on its head. We now see Em and Emmie as Masha and Masha (for all you Chekhov nerds out there, we don’t have a Seagull/Three Sisters mash-up on our hands—it’s just one Masha, split two ways) and Toshie as the horribly rude and uppity sister-in-law, Natasha. In this insane third act of Three Sisters, all of the characters are still in a basement (presumably Toshie’s) swiping away on cell phones, but now Brown superimposes these existential Chekhovian personalities on each of her characters (idealizing now Moscow instead of the Slender Man). This meshing of worlds is incredibly intriguing, but even having a knowledge of Chekhov, it may be a struggle to keep up and find a way back into the narratives that are so specifically crafted in part one.

Brown beckons us to follow her down this psychological rabbit hole and we end up back in Emmie’s basement in 2014, right as the girls’ anxieties, teenage frustrations, and stifled aggressions are about to come to a strange and shocking climax.

In a world where so many plays are tidy and linear, it is a surprising and strange thrill to experience the chaos, imperfection, and horror of masha masha Natasha. The performances by all three actresses are heartbreakingly accurate as they oscillate between childishness (for example, taking vitamins and laying newspapers over a collection of Beanie Babies to shield them from blood) and the dark depths and violent imaginings that lie outside adolescence. Sarah Blush directs with a precision that creates a haunting sort of beauty even in the ugliest moments; her direction coupled with the excellent design team left me feeling in very capable hands, even as the story was taking chaotic and unsettling turns.

Overall, I would recommend this experience to anyone who is aching to see psychological horror done well on stage. While disorienting and confusing at times, Brown and her crew are unabashedly brave and terrifying in their storytelling, and left me with a lingering unsettled feeling that continues to creep up my spine.