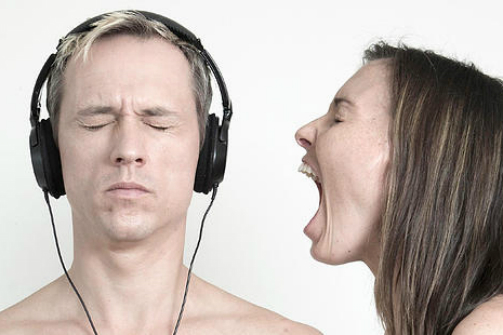 BOTTOM LINE: An engrossing, chilling narrative of a brother's attempt to reconcile his sister's troubled past in the latest from Canadian playwright Hannah Moscovitch.

Silence and stillness permeate the space as one enters the theater for Alley Theatre's "Little One," an intimate two-hander from Canadian playwright Hannah Moscovitch. Our protagonist, Aaron (Daniel Arnold) sits with his back to the audience, unmoving, and it is this reserved, almost cautious energy that sets the tone for the rest of the piece. Aaron relates much of the show through first-person narrative, punctuated by flashbacks, engaging us in his struggle to understand the meaning of an eerie tape recording sent to him by his younger sister, Claire (Marisa Smith). Moscovitch adeptly navigates the structure of alternating narration and flashbacks, taking us through their youth and adolescence as foster siblings, in which Aaron—the more "well-adjusted" of the two—must not only endure but actively assist in the healing of Claire and her anti-social (and often destructive) behavior. While never malicious, Claire is—in the play's words—unable to tell the difference between hurting someone and loving them, and the mystery of her behavior is rooted in a trauma that no one seems able to uncover. Rather than focusing solely on her mental illness or the foster care system, however, the script instead examines the frequent disconnect between love and the behavior we use to express it.

Arnold does a remarkable job as the determinedly "good" older brother, whose patience and understanding begins to crack under the stress of living in service to his troubled sister. His halting, almost painfully polite demeanor, in conflict with his inner anguish, paints the portrait of a victim so well that we hardly question the reliability of his narrative. Smith gives a compelling and chilling performance as the disturbed and elusive Claire, whose emotional and physical rigidity is both enchanting and estranging.

Director Amiel Gladstone has crafted a pervasive sense of intimacy—the playing space little more than a large throw rug—in which we hang on Aaron's every halting pause. His staging, though colored with some notes of familial comfort, never allows the tension to fully dissipate, and even a simple hug carries a tension belying an ever-present danger. Lighting designer Adrian Muir uses the simplicity of the Fringe's rep plot to his advantage. Though bordering on being too dim, he effectively creates a memory space in which we feel complicit in the story.