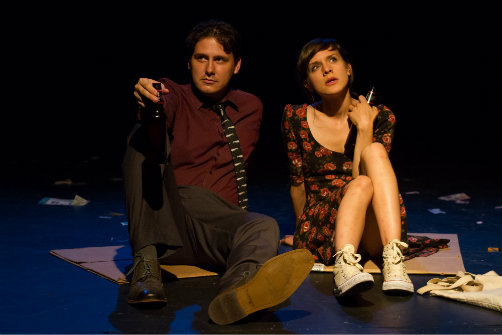 BOTTOM LINE: Liminal is a coming-almost-of-age story about that twentysomething you know who just moved to the city and hasn’t quite figured it out.

To be liminal is to be on the edge of something, in a moment of change, or a moment in between. The new play Liminal is about one of these moments. Callie, 21 (played with verve by Rachael Balcanoff), has just moved to New York City with a degree in poetry, following an (ex-)boyfriend who almost instantly left the picture. Now, like many recent college grads transplanted to the city, she is left wondering whether or not to stay—and in a broader perspective, what it means to be facing adulthood and defining “home” for herself for the first time.

Through a series of vignettes that jump freely back and forth through time, we get to know Callie, her struggles, and her flaws. She is quick to shut down anyone who threatens her self-imagined role as protagonist in the story of the world, even interrupting people to try to bring the story back to herself. The three women of color (Shashone Lambert, Vanessa Pereda-Felix, and Samantha Jane Williams) who Callie keeps running into even introduce themselves to her as “[her] minor characters,” highlighting Callie’s myopic point of view. These three women bring humor and fun, cracking jokes about Callie’s naiveté while encouraging her to have a more positive outlook.

The set for Liminal is made up mostly of a few small stair units which are reconfigured for each scene, a simple and adequate idea that nonetheless sometimes drags during the scene changes. Much more interesting is the detritus of the city—the garbage and Metrocards strewn across the stage from the beginning. Callie feels a responsibility to clean up the city’s refuse, but slowly realizes that it is her privilege to even have time to care about littering.

As Callie tries to create meaning for her own story, the most significant person in her sphere becomes a homeless man named Charlie (played simply and winningly by Allen Jenkins), who shares his past with her while being bewildered by her quest for meaning in the city, which has no relevance to his life. New York is his home, and he intends to stay. Callie seems to think she can save him, but when a tragic accident makes that flatly impossible, she’s left even more at sea than before.

Strangely, it is the sad-eyed Jack (Thomas Wood), a poor match of a date Callie is set up with, that provides the real perspective that she needs. She is quick to blame him for his privilege as a straight white guy living in a mostly non-white neighborhood, but she also swiftly dismisses the stories he tells that give dimension to his experience—from the three jobs that he works to pay his rent in Bed-Stuy to a harrowing fraternity hazing.

The non-linear structure provides what interest there is for this oft-trod story of a twentysomething adrift. The scenes from the date take place over one evening, while the relationship with Charlie is shown over several months. It all starts to feel very New York—the rush of the city making some day-to-day experiences feel compressed, while others, such as a bad date, can have big highs and lows within the span of minutes.

Callie’s selfishness and blindness to her own privilege—while accusing others of the same—make it difficult to empathize with her. At best, she’s another slice of the Millennial pie that we have been fed many times in plays and film. She’s searching for meaning, but ignores any meaning that doesn’t look like the story she’s already written. Nonetheless, those of us who have transplanted ourselves to New York City in this new millennium can relate to the feeling of energized listlessness that comes with this place. Jack, though not a great potential boyfriend, ends up providing the words with the most wisdom: “I think it helps to find your own logic in inexplicable situations.” Rather than waiting for the grand story of life to reach a poetic climax, or have a symbolic meaning, Callie must decide for herself what is important and how she wants to live in light of her situation in life. We’ve heard this before, sure, but it doesn’t hurt to be reminded.