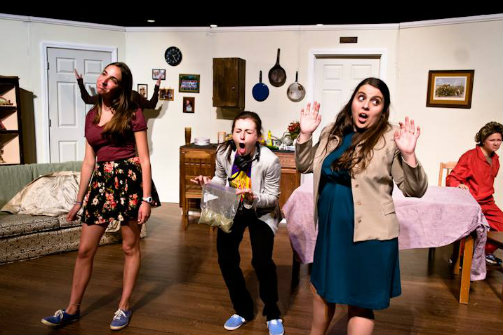 BOTTOM LINE: Intended as a backstage peek at a sitcom like Growing Pains, Laugh Track tries hard, but suffers from its own growing pains.

In the same vein of Michael Frayn's Noises Off (the hit 1982 comedy about what happens behind the scenes of a low-rate farce), Laugh Track lands us in the taping of the last episode of the ninth season of He’s A Dad! The show has long gone stale, so the actors create their own drama to stay awake. Teenage starlet Brianne (Beanie Feldstien) is in love with the cue card guy Dennis (Chris Baron), an aspiring writer who can’t keep his hands off of the forty-year-old actress Nebraska (Anna Drezen).

The youthful buoyancy of the team behind Laugh Track is infectious, and the production certainly starts out strong. One of the best moments comes near the beginning, as Krystal (Liliana Tandon), the exacting show-runner of He's A Dad!, gets the cameras rolling and counts down “3, 2, 1….” Lights burn bright, and the cast of five belts out the theme song of the show within a show.

As Krystal, Tandon holds the reins of this production, and delivers an honest performance that helpfully grounds Laugh Track. But after the exuberant theme song, the rest of the show feels a bit like a let-down. A comedy like this demands timing and a technical precision that this inexperienced, if passionate, young cast doesn't have...yet.

Laugh Track has a a tendency to stop and start, and at times it is unclear whether what we're watching is part of the fictional He's A Dad!, or the supposedly crazier life behind the scenes. Some key directing choices might have helped with this. For instance, Shirley, the texting grandmother (played by Marilyn Lucchi) never takes off her massive (and obviously fake) gray Harpo Marx wig, even when the show-within-the-show's cameras stop rolling.

Frayn was inspired to write Noises Off after watching Lynn Redgrave in the wings during a performance of his The Two of Us; "It was funnier from behind than in front" he said of his own play. And while this isn't exactly the case with Laugh Track, the frenzied energy of the show's load-in and load-out (15 minutes each, a FringeNYC rule)  showed an urgency that is missing during the show. I have a feeling it's "all in the timing," and with a more robust rehearsal period, this young company will have a very funny comedy indeed.