Last Night at The Carmine 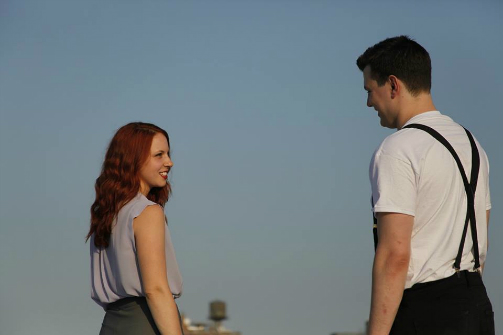 Last Night at the Carmine.

BOTTOM LINE: A series of charming vignettes take place on the rooftop of The Carmine for one last hurrah.

Welcome to The Carmine, a picturesque New York City building that has been around for 98 years, with a bar on the ground level and a quirky cast of characters at their favorite watering hole. Playwright Caroline Kelly Franklin uses untranslatable words projected on stage as a device to describe the scenes that are about to unfold, and all of the action astutely takes place on the rooftop of the building.

We start off with the current owners, Frank (Sam Charny) and Thompson (Dennis Demitry), faced with the tough decision of having to close down the bar. It was at this same building many moons ago that they both had a very special night together, but back then Frank and Thompson didn’t even begin to fathom a life with one another, and as fate would have it, Frank ended up marrying Thompson’s now deceased sister. Both Charny and Demitry do a good job as the mature men trapped between nostalgia, memory and what’s to come, in what ends up being the most successful and fully realized story of the evening.

They are all connected to The Carmine, and through the entertaining vignettes Franklin succeeds at endowing the building with breath and a heartbeat, especially when Nathaniel (Gregory Bell) an architect up on the roof to sketch the view for one last time, explains the history of the building to his student Madeline (played by Franklin), who happens to be there that night.

There are a lot of coincidences in this play, and almost every couple references someone from the earlier or upcoming scene, yet they never face each other on stage. Franklin has a gift for sharp and witty dialogue, but her structure is safe, and sometimes gets in the way of creating real conflict. The untranslatable words seem to have stilted the play’s freedom to grow and connect.

Other performances of note include a charming and entertaining Clint Tate as the enamored bartender James, a feisty Whitney St. Ours as Vicky, and an effervescent Hannah Seusy as Chelsea, in the most absurd and comical scene of the night, alongside Derek Long who plays The Tenant.