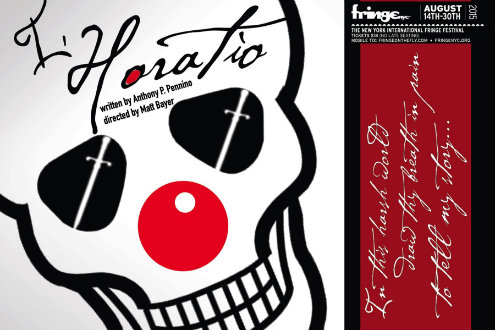 BOTTOM LINE: An adroit and entertaining spin-off of Hamlet.

Writer Anthony P. Pennino’s new play, I, Horatio, is a spin-off of Hamlet, giving us more from those characters who manage to survive Shakespeare’s longest tragedy for a comedic “missing sixth act.” Though it is not the first play focused on Hamlet’s more minor characters—Tom Stoppard did the same in Rosencrantz and Guildenstern are Dead—Pennino’s premise and rendering are starkly and delightfully original.

The play follows Hamlet’s loyal companion, Horatio, on his quest to carry out Hamlet’s dying request to tell his story. Lights rise on a catching stage picture, the first of many crafted by director Matt Bayer. An effeminate King Fortinbras (Peter Collier) stands clutching his clavicle as a gigantic ruby ring catches the light. His courtier Osric (Alexander Stine) poses dutifully beside him as a blood-soaked Horatio (Blake Merriman) stares into the distance. Bayer’s directorial hand enhances Pennino’s sharp and twisted writing with broad comedic sensibilities, which the ensemble shares. The actors step, with full bodied-humor, into the inventive characters Horatio meets along his quest. He sets off to collect Hamlet’s body from the clown-nosed Gravedigger, played with impressive dexterity by Collier. Horatio rents a room from the obtuse owner of an S&M dungeon, Nell, played with boisterous vibrancy by Courtney Moors. For his final preparation in what Horatio intends to be a one-man show, he visits The Player King (Collier again).

The team has barraged the play with jokes and jabs that seem targeted at an insider theatre audience. Though not all of them completely land, I, Horatio and the play-within-a-play are enjoyable. Moments fluidly and freely splinter off into absurdity while maintaining a story that manages to make perfect sense within the world they’ve crafted. It is worth it to get thee hence to I, Horatio.