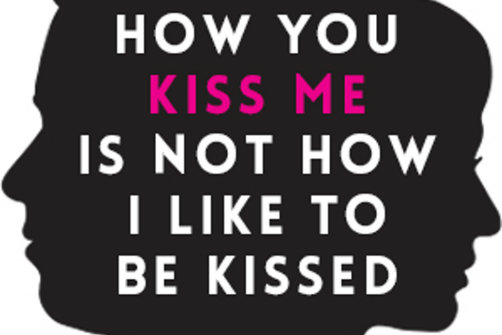 BOTTOM LINE: A play that will give you new-love butterflies, maybe take them away, and transform them into something else entirely— something poetic, complex, and memorable.

While the title of How You Kiss Me Is Not How I Like To Be Kissed is a mouthful, the play itself doesn’t feel like one (unless I were to make a horrible kissing pun, which I won’t.) The play centers around the romantic relationship between “X” (Olivia Lemmon) and “Y” (Jacob Brandt), and the language surrounding them is precise and occasionally sparse.

The opening moment features the couple “kissing,” with X guiding Y in how she likes to be kissed. I say “kissing”  because the show features largely gestural body language to represent physicality (like the kissing). X and Y talk for a little about kissing, we get to know them getting to know each other, and the play clips to a moment a few steps further in their history. Moments throughout the play are also accompanied by beautiful musical composition from composer Samuel “Gus” Ruchman, and performed gorgeously on piano by Cynthia Meng. The music both lends the play airiness and grounds it, adding another layer of emotion and sound to the relationship.

As the play progresses, X and Y struggle and grow—X is, according to Y, the kind of girl who gets country songs written about her. Y enjoys routine. Brandt and Lemmon give strong, emotional, beautiful performances. Rather than asking for the audience to identify with one character over another, Dan Giles’s writing and directing helps shift the focus towards a fuller emotional connection with both. An especially memorable moment occurs when X and Y are fighting, and Brandt declares that “[is] yours,” to X. X, fiery and tempermental, does not know how to respond. The emotions are palpable—but also well-timed with jokes, so the heaviness or the lightness never tips the scale of the play. Instead, its beauty is in the balancing act.

While the piece could have been about dating and love in your youth, that’s not where it focuses. It explores various elements of romance and intimacy—presents, sexuality, jealousy, history, jokes, family rituals—all in gorgeous, smart, gentle ways, which saves it from feeling like a commentary on millennial dating, and makes it more about how humans negotiate their lives together. The gestural movements between scenes helps with this, for the most part. There were moments where I didn’t understand what the gestures stood for, and some are quite abstract, but a few others, like a handshake, take on meaning in a way that feels truly rewarding, like uncovering a small clue.

Ultimately, How You Kiss Me... is strongest in its moments of rawness grounded in reality, especially when details mentioned earlier in the play become a little less mystical. For example, X mentions that she does not want to be touched suddenly. Later on, it comes to light that there is a darker moment in her sexual history. The characters' histories are never reductionist or simplified, though. I felt for X, I understood her, but at the same time I never thought the characters were fully defined by what I was witnessing; they weren’t romantic tropes, but actual people, and I was only catching glimpses of them. They existed in some other ethereal, but real, place, like maybe I’d see them at a coffee shop later. I’d wave, and they’d just smile and leave.