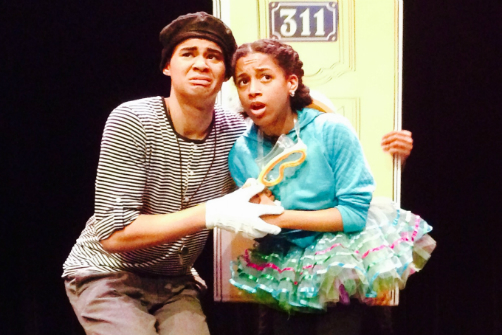 BOTTOM LINE: If you like creepy, but silly and not too freaky, you’ll like the show. (Michael, age 8)

Jamey Hood’s very amusing double bill of Haunted Holliot Hildorf Hotel & Shadow’s Unicycle is part of FringeJR, FringeNYC’s family friendly programming. Knowing that I may not be the target audience for such a show, I brought an expert with me to help me better assess the goings on, my 8-almost-9-in-three-weeks-year-old son. However, you don’t have to be a kid in order to enjoy these refreshingly fun and silly pieces.

As the top of the program points out, this is “theater for kids performed by kids!” and what a talented and charming group of kids it is. The cast is made up of 16 teenagers, aged 14-18 (their delightful bios make the program a treat to read), that are part of the youth program of Open Hydrant Theater Company, a fantastic company bringing the arts to the South Bronx. From the very first moments, when a lone performer starts humming the circus anthem, “Entry of the Gladiators” (look it up, you’ll know immediately what it is), and then is joined by the rest of the cast who skip, parade and cartwheel across the stage, both my son and I had smiles on our face.

The first tale we are thrust into is Haunted Holliot Hildorf Hotel, which tells the story of world class ghost hunter Helen Ivy Bunter (played with spunk by Mavelyn Cruz) who is summoned to the eponymous hotel by crotchety proprietor Allastair (the appropriately mysterious Stephen Durosaiye). Told story theatre style, with only a few props, a set of classroom chairs, and appropriately gothic cardboard staircases and doors (designed by Gary Smooth alongside fittingly moody lighting by Lisa Hufnagel) the cast narrates Helen’s adventures unraveling the mystery which includes pajama-clad zombies, a friendly ghost named Pierre (the affable Emmanuel De La Rosa), and some clanking thermostat issues. Written in rhymes as if Shakespeare wrote an episode of Scooby Doo, it was hard to tell at times if the giggles I heard were coming from my son or from me—usually both of us.

Following the first play, the whole audience engaged in a game show, Dora-style, where we guessed which door to open to find the missing Pierre while also recovering Helen’s ghost hunting paraphernalia (i.e., her net and her underwear) and hoping to avoid the slumber partying zombies (we won, by the way, and got prizes to boot).

The second piece, Shadow’s Unicycle, focuses on a new heroine, Shadow (the engaging Dieynaba Dieng) who lives in a spooky castle, “just like yours only spookier.” She rediscovers her unicycle that has been locked to a “slightly uncomfortable tree” (portrayed sympathetically by the actors) and, under the light of a brilliant full moon, tugs and tugs as hard as she can (withstanding injuries to self and to tree along the sway) to get it free. She discovers that riding a unicycle is hard, but ultimately rewarding and, after a lot of scrapes, ends up back home with her mother who comforts her with a tasty candy bar.

Working with young actors can be tricky, but directors Sarah Rosenberg and Luis Cardenas, along with choreographer Radina Johnson, make it seem effortless, and every cast member has their moment to shine and stand out on stage. Afterwards, when I asked my son the hackneyed, “What was your favorite part?” (BTW, we’ve got to find something better than that), he honestly and accurately replied, “All of it.” And, you know what? I have to agree with him.