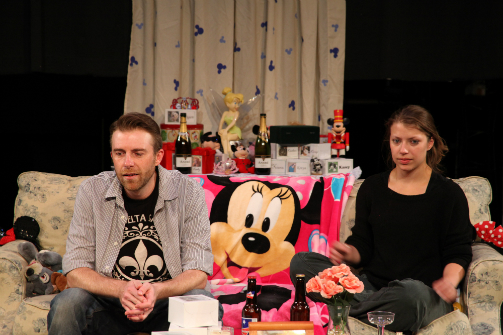 BOTTOM LINE: When Kelly uses her Beatles obsession in her Disney-dominated world, she ends up finding herself.

What do Disney and the Beatles have in common? Not very much, unless you are Kelly K. Kelly (Lizzie Stewart). Kelly’s home is an odd array of Disney memorabilia, courtesy of her mother Kate (Erin Amanda Anderson), and boxes of deceased pets. Amid this mess, Kelly lives under the same roof as her oblivious Disney-obsessed mother, her somewhat absent father Ken (Milton Elliott), her it-girl sister (Melissa Diane Martin), and her grandfather’s ghost in the basement. Instead of trying to fit in with her family, Kelly goes to the other extreme, going out of her way to not fit in. When it comes to Disney, her mother worships the princesses while Kelly prefers the villains, which go well with her wardrobe of black, black, and more black. Also unlike her entire family, she is obsessed with the Beatles and classic musicals. On the night of her parents' 20th wedding anniversary, Kelly has finally had enough of the Disney charade, and vows that for the entire evening she will only speak in lyrics from the Beatles’ catalog, much to the annoyance of her parents. But when her mom’s friends Jenn (Jessica Ryan) and her husband Jason (Jeff Ronan) stop by to celebrate, Kelly and Jason instantly have a connection, and for the first time, Kelly finally finds someone who understands her world.

As someone who felt like an odd duck a time or two or twelve growing up, Hard Day’s Night hit me...hard. Self acceptance is an extremely difficult lesson to learn and Kelly has quite the time with it. She says she would “rather be invisible and fly under the radar," and “I don’t want to draw attention to myself,” which are valid sentiments when your mom and dad clearly have their own issues and your sister hates you. When she finally meets a person who might be able to tear down the walls she’s built up, she’s scared out of her mind. She is so used to being ignored, it is hard for her to believe she matters. How refreshing it is to see such a pivotal moment, and one that I, and likely many others, can relate to, portrayed in such a tender way.

The cast's energy for the subject matter is palpable, and each actor gives such an amazing performance that I wanted the show to last another hour or two. The misunderstood teenager card is something that has been used over and over again, yet here it has a new life. We have all seen the moody “woe is me” teenage character, but what makes Kelly different is she is more quirky and sarcastic than mean. And with Stewart fully embodying the role, there are quite a few laugh-out-loud moments too, which are a direct credit to Vicki Vodrey’s writing. With a book that has almost a Gilmore Girls humor to it, the story is fresh and resonant. Topics such as depression, over the counter drug use, and infidelity are included, but discussions are handled in a fairly open manner and do not detract from the spirit of the story, which Vodrey manages to keep alive throughout the show, even through the screaming matches between Kelly’s parents.

A special nod should also be given to Vodrey’s Beatles Lyric Dialogue Specialist, Jan Simon. I imagine making dialogue out of Beatles’ lyrics would be a fairly difficult task, yet the lines that were chosen (which range from well-known Beatles songs to the more obscure) flow effortlessly.

There is a kooky charm about this show. As Kelly says about her family, “They will never understand her world, and that is okay.” Her world is one I would not mind living in, and her story deserves a long and happy life on stage.