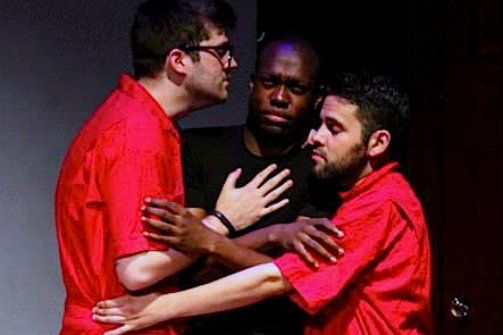 With the recent popularity of post–apocalyptic stories, including flesh-eating zombies tirelessly stalking sweaty transients, down and out adolescents battling to the death, and mole women rising from a bunker "strong as hell," G.U.S. is so, like, on trend. Seeking shelter underground after something bad happened above, this completely improvised comedy show follows the lives of three men who have been locked in the Generic Underground Shelter (G.U.S., get it?) since 2014. Created, developed, and performed by Nick Carrillo, Langston Belton, and Devin James Heater, the show premiered at The Factory in 2012 and has since been performed at various comedy and improv festivals around the country. What sets G.U.S. apart from other dystopian tales is its focus on the ho–hummness of life after Armageddon, as if the cast of Seinfeld found themselves trapped in the coffee shop for all eternity.

Carrillo, Belton, and Heater have an ease with each other that is evident even as they take on the potentially dangerous task of a completely improvised piece. What’s most apparent in G.U.S. though, is the surprising lack of danger in the world. While the sounds of zombie dinosaurs or wrathful snake gods (supplied by Christine Liz Pynn, who also runs the lighting board) would seem like cause for alarm, the men quickly dismiss any threat of actual danger. Instead, they resort to competitions about who is the smartest, reenact favorite films, noodle on the piano, and recount tales of lost loves in order to fill their time.

Rather than explore the drama and tension that could result in such a scenario, the randomness of the exchanges underscores a monotony that would realistically result from three strangers finding themselves trapped together for the foreseeable future. Unlike the high stakes (and higher grossing) post-apocalyptic tales that have dominated popular culture in recent years, G.U.S. is intent on tackling the hilarious tediums of life after the world ends.