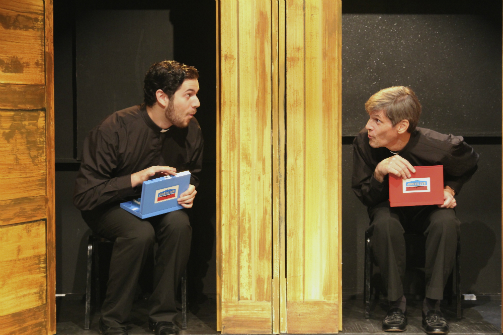 BOTTOM LINE: In this irreverent new comedy about Catholicism, a priest bites off more than he can chew when he meddles in his sister’s love life.

No one ever said being a priest was easy. And for Father Kennedy (Gary Kozak), the job has all but gotten to him. In Father Kennedy, by Brian Kraker, a priest returns to his home town to serve as pastor of his childhood parish. When he took the job a year ago he believed it was the right life decision, but now he is not so sure. He loathes his entire congregation, constantly skips out on his priestly duties, and now his sister Rose (Amber Bloom), has started dating the parish gravedigger, Ramsey (Alex Ashrafi). Not too pleased with his sister’s choice in men, Father Kennedy tells Rose she is not allowed to see Ramsey. When that does not work, Father Kennedy takes it upon himself to break the pair up, going so far as to plant lingerie in Ramsey’s bedroom to stage an affair. The prank not only causes trouble for the lovers, but Father Kennedy is left questioning his path in life when he is forced to face the aftermath of his meddling.

While somewhat of a far-fetched story for a Catholic priest, Father Kennedy is an entertaining play. Subjects like morals, faith and a person’s life purpose are front and center here, and even though the show mainly deals with them according to the Catholic church’s doctrine, they are universal issues.

The supporting cast (Alex Katz, Ellany Kincross and Simone Policano) adequately bring their characters to life. Yet certain scenes feel too dramatic and unnecessary, such as a fight Kennedy has with his assistant Nancy (Kincross), who happens to be his unrequited love interest since high school, over going to see a parishioner who is in the hospital in a coma. Also, as a practicing Catholic, there were points in the show where I felt certain gestures—like Father Kennedy’s assistant Father Kelly (Katz) dipping communion wafers in Nutella—were unnecessarily irreverent.

The overall story of Father Kennedy flows well for the most part, yet there seems to be a slight lack of cohesion. A few secondary story lines are entertaining but not fully connected to the main plot and left me asking “why exactly should I care about this?” And scenes that focus on the main conflicts could be fleshed out more effectively. Father Kennedy ultimately has a strong story but leaves some questions unanswered.