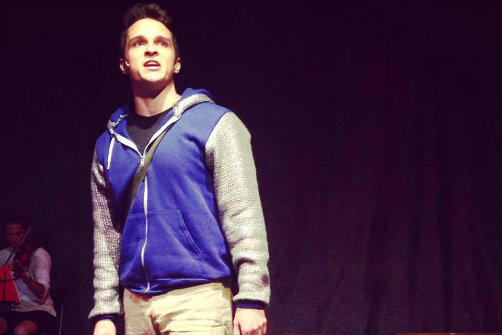 Luke Hoback as John of Bath in Far From Canterbury. Photo by Jane Marcus.

BOTTOM LINE: This medieval musical hits all the high notes of a Broadway smash with the historical allure of Chaucer.

John of Bath (Luke Hoback) is a young knight ready to embark on his fairytale life. He’s handsome and the greatest songwriter in all the kingdom. He has all the makings of a great protagonist, except for one small detail. He can’t speak to women. This leads to trouble when John of Bath is brought before the Queen in order to atone for his crimes—taking a princess as his own and leaving her in the woods to die—and cannot find the courage to defend himself. After his dear friends intercede, the Queen offers a challenge. John has a year to find out what it is that women most truly desire. With the help of Marcus (T. J. Wagner), an attractive ladies' man who also happens to charge for his services, and Agnes (Hannah Richter), a strong-willed and free-spirited woman running from an arranged marriage, John sets out to scour the kingdom and beyond for the answer to the Queen’s riddle.

Far From Canterbury is a musical retelling of Chaucer’s The Wife of Bath’s Tale, with a less skeevy protagonist and a more colorful cast of side characters. Our heroic trio encounters the Knights of the Round Table, Canterbury’s hottest musical group, on their quest, and a rap battle ensues. Ok, so maybe it isn’t quite Chaucer. But what Danny K. Bernstein has done is taken Chaucer’s most popular Canterbury Tale and turned it into a musical journey of self-discovery. John, guided gently by the mysterious Dolores (Katie Drinkard), is learning not only how to find his voice but to forgive himself as well.

Even if sometimes it feels a little formulaic with a duet between strong independent women, a secret seduction number, and an inspirational refrain, the music is strongly written and would fit right in next to the biggest Broadway hits. The cast gives a remarkably powerful performance; each number somehow managing to outshine the previous one. There is a lot of heart in Far From Canterbury and it shows from the seamless choreography to the well-constructed musical score. Bernstein’s musical comedy will undoubtedly go far after Fringe.