FAFI- An Afrikaner Boy Comes of Age in Apartheid SA

Off Off Broadway, Solo Show
Runs through 8.27.15
VENUE #5: The Celebration Of Whimsy, 21 Clinton Street 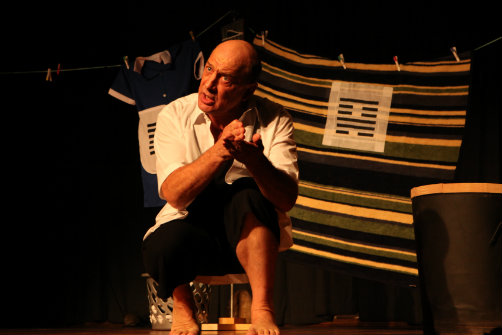 BOTTOM LINE: A master in control of his abilities presents a haunting tale of love and guilt.

Sometimes when in a theatre, we are met with performances of unspeakable force and inventiveness, performances that present a universe so carefully crafted that once the lights go off in the house, we’re immediately brought into it. FAFI does precisely that.

Named after an illegal betting game played in South African townships and run by a Chinese contingent, this one-man autobiographical journey tells the story of a white Afrikaner coming of age in Apartheid South Africa. It starts with adult Gys de Villiers sitting on a chair and contemplating what might be a dark dot on a distant wall. With his upper body engulfed in white light, he talks of home and of those who wouldn’t leave theirs. Suddenly, we’re transported to de Villiers’ childhood years, to the moment when he runs to buy his brother candy while being timed by said brother. On his way, through comments as rapid as his agile steps, drops of history fall on our ears and paint, right before our minds’ eyes, the absent characters erased by such a violent period. The story grows in mystique as the young de Villiers grows older and shares his dreams with Elsie, his black mother, and shares his memories of their conversations with us. In contrast, his memories of his white family are quieter and duller—as he tells us himself. Upon reaching eighteen, he gets sent to the Marines, and experiences firsthand the gruesome reality of the racial segregation brought on by Apartheid.

Showing a hexagram taken out of the Chinese divination book of I-Ching, de Villiers introduces each moment of the play and sets the mood for his journey, giving us both the time to process what has passed and also clues of what's to come. Nonetheless, by mutating his flexible and youthful body into young and old, a feature accomplished with equal ease and success through the exploration of his vocal timbre and range, de Villiers never ceases to surprise, and his story is kept alive and fresh from beginning to end.

The atmosphere is completed by the smart use of different sources of light—watch closely for the dream sequences—and by the music that at times is mere background, and other times is a fantastic soundtrack, carrying de Villiers’ energetic words as a horse would its jockey towards the victory line. The off-stage part of this ensemble is director Jaci de Villiers. Also a co-writer of FAFI, she brings a keen eye and an indisputable ability to create a territory on which the spoken word flourishes and grows into theatre.

Another strong point is the honest portrayal of an individual whose skin becomes a burden in its own way, and puts him in the apparently privileged position of the oppressor whose beloved culture and language now announced extermination to those he once called family, and who is now protested against by that very same family. FAFI is a powerful depiction of a man haunted by his white privilege who seeks soothing and comfort in the memories of those whose skin made them a target and a casualty. If you have time to see only one show at the Fringe Festival, FAFI would be a good choice.