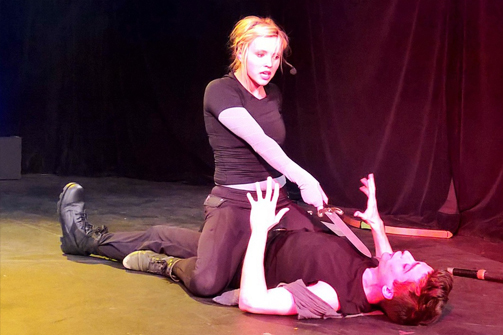 BOTTOM LINE: Not just for gamers, EverScape is an entertaining show filled with masterful fight choreography.

According to a note in the program, EverScape takes place in “the present, and an online gaming world the characters wish was the present.” The play, directed by Ashley Gunsteens, centers on four people who make up a team in the world of the game, but only two of them actually know each other in real life. Devo (Phil Gillen) and Gil (Michael Rehse) work in tech support and their days are filled with monotonous calls and aggravating situations. When they get home they immerse themselves in the exciting and violent gaming world. Kirin (Ivy Croteau) is an aspiring graphic designer, but currently works in a coffee shop, and she too spends all of her free time online. We don’t learn much about Foster (Tim Heller) until the end, but he is their leader and has high aspirations for his EverScape team.

Everything changes when the creators of EverScape announce a contest. The team who beats the game wins a job in game design. This causes a downward spiral as everyone invests more time in the game and less time in the real world. Life begins to imitate art, or in this case the world of EverScape.

This show would not be what it is without the fight choreography by Michael Hagins. At least half the show involves fighting, but it never gets boring. Each move is meticulous and well rehearsed. One of the most creative moments of the show occurs when real life and the game combine. For example, Kirin fights in the world of EverScape but the dialogue is from her coffee shop job: after explaining to a customer that they don’t serve green tea lattes, Kirin shoots her with a bow and arrow. This creativity is what makes EverScape so special. It’s a very unique show that manages to be funny, sensitive, and dark at the same time.

The play is well written by Allan Maule and filled to the brim with hilarious one-liners. My only gripe: when Gil’s life takes a dramatic turn for the worse, it seems to come out of nowhere. There could be a better way to ease the audience into his melt down. However, the acting is impressive across the board. The cast is very young but very professional. In addition to the four main characters, the other actors take on various roles in the game and in "real life" and they all stand out in different ways.

In the end, this play is about escape. We all need an escape from our daily lives, but the key is to not let it overtake you. It’s an important lesson told in a creative and entertaining way.