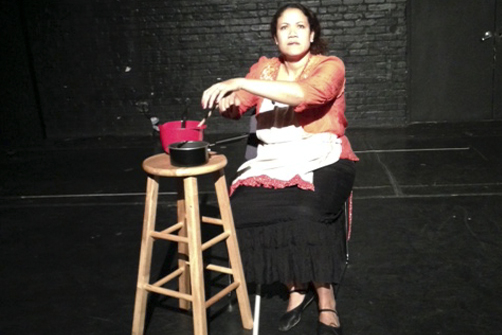 Elvira - The Immigration Play takes place in an immigration office, where Elvira, played beautifully by Jennica Carmona, is about to be deported back to Mexico. The play unfolds in a series of flashbacks as she tells her story to the Immigration and Customs Agent (Joe Loper) who is fighting against her. Although 90% of the play is spoken in English, a basic understanding of Spanish was definitely helpful to my enjoyment of the show.

This play attempts to tackle an important subject, and mostly does it well, however at times the result can be a little preachy. Most impressive is the play's ability to show the humanity of its subjects. Just as one begins to feel compassion for Elvira, she says something terrible, and conversely, as hateful as the ICE agent can be, he ultimately becomes a sympathetic character. The writing makes it clear that no one person is to blame in the immigration battle. The only downfall in the story comes in a climactic scene that is obviously supposed to make an impact, but happens so fast there is barely time to blink. It left me with more questions than answers. Elvira’s sole motivation for staying in the United States is to be with her son. However, since her son is never seen onstage, the urgency of her situation can become lost.

Loper is the standout of the play, acting with a commanding presence, even in scenes where he is just watching. Also of note is Cooper Kaminsky who wanders in and out of scenes playing his guitar. Kaminsky plays a series of smaller roles with quiet effortlessness and proves to be a nice foil for the authoritative Loper. The direction for the most part is very effective. Scenes transition seamlessly into various locations while physically staying rooted in the immigration office. Regrattably, the staging is unsuitable for this specific venue, causing much of the play to take place so far downstage that sightlines become problematic.

Overall, Elvira - The Immigration Play is an engaging piece about an important topic, and Carmona's script handles the subject matter with sensitivity and complexity.