Elephants and Other Worldly Dilemmas 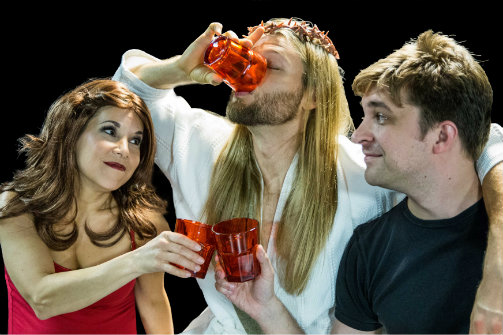 What is love? John Lennon called it the flower we have to let grow. Martin Luther King Jr. said it is the only force capable of transforming an enemy into a friend. The Bible insisted it is both patient and kind. In the case of Elephants and Other Worldly Dilemmas, love is...a dead elephant.

The play opens in a human waste facility in New Jersey, where a verbal sparring match between rational scientist Seth (John Olson) and Christian receptionist Martha (playwright Dina Laura) is in full swing. The aggressive Seth, pining after his demure coworker, invokes Scooby-Doo and Ghandi in an awkward attempt to win her affections. Unimpressed, Martha rebuffs his clumsy advances. Seth plays his trump card, however, when he lures her into his lab and raises a large tarp to unveil Lucky, a dead Indian elephant. Seth asserts that Lucky died of SEDS—Sudden Elephant Death Syndrome—and was the victim of a massive cover-up at the local zoo. With the help of mysterious British temp Fred (Matt Stapleton), Seth and Martha set about dissecting the elephant to determine whether or not it actually died of SEDS, a messy condition that Seth alternately refers to as “death by defecation.”

Though initially skeptical, Martha is soon convinced of the worthiness of the endeavor and, before you know it, she’s extracting Lucky’s organs in the name of science. After Martha removes the final piece of the animal’s innards, however, Seth reveals that there is no such thing as SEDS, and he planned the impromptu autopsy as a way to spice up Martha’s milquetoast life. Seeing the depth of Seth’s feeling, Martha not only agrees to go out with him, but suddenly kisses him, despite the fact that they are both covered in elephant entrails.

Love, having prevailed yet again, soon gives way to a mysterious phone call between Fred and a representative for the “Big Man.” Fred seems to be divine in nature, as he leaves Martha a feather to remember him by and tells her that he used to date a “demon.” The second act sees Fred whisked away to a honky-tonk bar in Texas, where he meets none other than Crystal (Laura again), the joint’s fun-loving bartender and his demonic ex. Crystal comes on strong, making no secret of her desire to win Fred back. For Fred, however, that ship has sailed. As far as he’s concerned, he’s strictly there as part of a mission for the “Fallen Angel Retrieval Team,” or FA-RT. When a drunk and barely functional Jesus (calling himself “Sal", also played by Olson) stumbles in from off the street, things get a little more interesting between the two former lovebirds. Used to helping (or not helping) other people confront their demons, Fred is unprepared to confront his own.

Elephants and Other Worldly Dilemmas is clearly a labor of love. Playwright Laura gamely steps into her own piece as both the nervous Martha and the voluptuous Crystal. Her enthusiasm is matched by that of both Olson and Stapleton, and the group's onstage chemistry is palpable. Elephants is one of the longer shows in this year’s festival, but the fare is hardly dense. Light, breezy, and with occasional moments of everyday wisdom, Elephants and Other Worldly Dilemmas isn’t going to solve the age old riddle of what love is, but it is not afraid to dissect some possibilities.