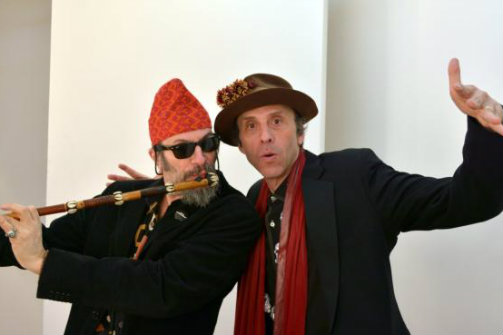 Lord Buckley, the mid-century performer and poet whose cultural relevance has often been overlooked despite being variously regarded as “the hipster’s hipster” and “the hip messiah,” has been the subject of a decades-long fascination for writer Oliver Trager. Following recognition as 2014 Planet Connection Theatre Festivity’s Outstanding Adaptation, Trager’s most recent inquiry into the life of His Royal Hipness, Dig Infinity!, appears as part of the 2015 NY Fringe Festival and is a sampling of Buckley’s most famous monologues performed capably by Trager himself.

Dig Infinity! imagines a meeting between Lord Buckley and Orpheus (played mysteriously by Russell Jordan), the Greek poet and musician of myth. On the midnight following his death, Buckley appears as a guest on a strange radio program, hosted by afterlife-chaperone Orpheus. Over the course of the program, the two debate art and philosophy as Buckley steps into moments of his past life to revive his trademark performances. The life-in-review comes to be a kind of reckoning with God as it becomes clear that Buckley’s negotiation with the Almighty for an opportunity to perform on His stage carries much greater spiritual heft.

In the spirit of the radio-show conceit, Trager is backed with live musical accompaniment by John Kruth and Boris Kingberg, who provide suitably ethereal jazz undertones to support Buckley’s own percussive cadence. The music competes at times with the text, but it pleasantly places the piece in a smoother, and slicker, time.

Though the threads of the loose narrative framework are tough to tie together, Trager’s homage to Buckley is both deadly accurate and a worthy tribute to a neglected talent, and the play captures the free-spirited nature of its namesake, both in tone and content.