Dead Lunch, or Who Prays for Bad Weather?

Off Off Broadway, Play
Runs through 8.24.15
VENUE #5: The Celebration of Whimsy, 21 Clinton Street 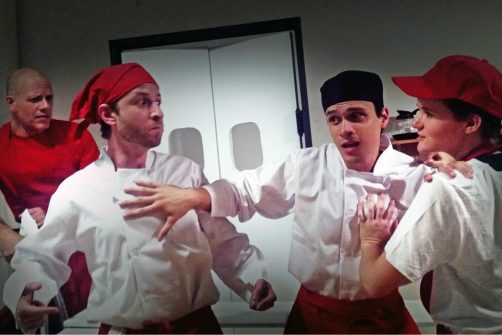 It is dead—it is so dead—during lunchtime at the diner featured in Dead Lunch or, Who Prays for Bad Weather? Anyone who has worked in a restaurant, or at a similar customer service job, will likely relate to the employees standing idly, by waiting for a rush that is nowhere to be seen. Since there is no actual work to be done, the employees have the time to muse on their lives, outlooks, and the workplace rumor mill.

It is Sean (Leah Alfieri) the busboy's last day and he is already 45 minutes late. Will he even show? When he does, will he cause a scene? Will he murder the overly optimistic manager, Graham (Matt McAllister)? Everyone has heard the stories. They all know about the carnage that teenage Sean has left in his wake when leaving other minimum wage gigs. The tedium and awkwardness of the slow restaurant is punctuated by fun and outrageous portrayals of these infamous Sean tales.

While I greatly enjoyed the witty, faced-paced, strongly performed dialogue between Rosie and Annie (Isa Frias and Haley Ganis) in the front of the house, and Miguel and François (Maxwell Moran and Jeff Solomon) in the kitchen, I could not wait for the next appearance of the busboy. I became increasingly eager for the lights to dim again because I knew I was going to get to see Leah Alfieri reenact another Sean rumor with swagger.

Alfieri is one of several actors to play multiple characters. Adam Pagdon appears in Act I as a cannot-be-pleased patron and mother-in-law and in Act II as the gruff but endearing Polish dishwasher, Stan.

Dead Lunch or, Who Prays for Bad Weather? is sectioned into two acts that are meant to occur congruently. During the first act, we see what the restaurant is like from the public's point of view. During the second act, we switch to the back of house to get a stronger understanding of what makes this restaurant tick, the motivations that drive the employees, and what is really going on with Sean.

This play does a great job of representing commonly found workplace personalities, but then highlighting the complex factors that drive and shape each person's philosophy. This play will likely be appreciated by anyone who enjoys dark humor and clever writing.