Off Off Broadway, Adaptation
Runs through 8.27.15
VENUE #2: Flamboyan Theatre at the Clemente, 107 Suffolk Street 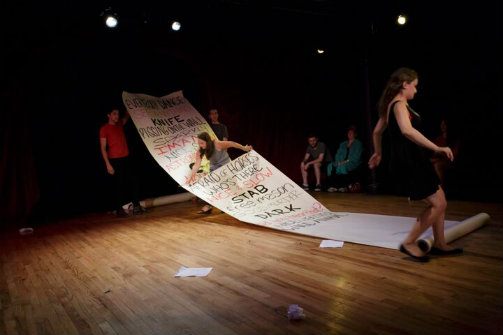 The ensemble of Chop-Chop-Zig-Zag-Woyzeck. Photo by Satoshi Tsuchiyama.

BOTTOM LINE: Leanora Lange heightens the fragmentary nature of Büchner’s Woyzeck and allows the audience to wind their own way through this story of love, madness, and murder.

When Georg Büchner died in 1837 at the age of 23, he left behind fragmented scenes of his new play, Woyzeck, with no indication of the intended order. The challenge and excitement of any production of the play is deciding how to order the scenes to tell the story. Leanora Lange’s current production of Chop-Chop-Zig-Zag-Woyzeck places that decision in the audience’s hands.

Frank Woyzeck (Bráulio Cruz) is a working-class barber trying to make ends meet. He works hard for his boss Capitano (Victor Barranca) and submits himself to a doctor’s (Aimee Thrasher) medical experiments in order to save up some extra money for his common-law wife Maria (Alexandra Marks) who is going to have a baby. The tedium of his daily life drives Woyzeck to insanity and paranoia. When Maria’s infidelity comes to light, Woyzeck does what he feels must be done.

In this production, Lange brushes against the trend for editors to place the fragments of Woyzeck in a narrative order. Instead, the audience is given the opportunity to choose the order of the play for themselves. At the beginning of the performance the company reveals a scroll with a listing of scene titles and the energetic Samantha Turret, serving as emcee, instructs the audience that every time the actors yell “cut” the audience should call out the next scene they would like to see. The company then takes the first suggestion they hear. Taking on the feel of a sketch comedy show, the production will never be the same in subsequent performances.

Lange leads an interesting experiment with the play. The random placement of scenes at times opens up new understandings of the play and explores new modes of dramatic structure. Some information ends up being withheld and the audience has to piece together the clues to understand what is happening. However, the play also suffers at times from the lack of conscious construction. It is difficult to connect with the characters and the emotional power of the piece is at times reduced to a bizarre comedy.

All of the actors in this enthusiastic ensemble are to be commended. It is no small feat to be able to jump to any scene in this play at the drop of a hat. However, Cruz’s performance as Woyzeck is especially notable as he deftly weaves in and out of sanity and is rarely given a moment to rest.

Ultimately, Chop-Chop-Zig-Zag-Woyzeck is a hectic and fast-paced tumble through the world of Büchner’s play that is simultaneously thought-provoking and entertaining.