butyou'reaman or: The Seven Men I Came Out to in India 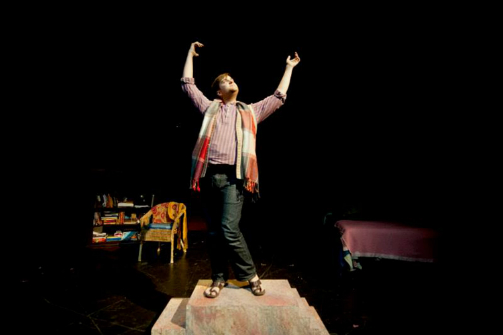 BOTTOM LINE: A one man show about love, traveling, and how much we don't know about the world.

In this one man show, Matthew Dicken’s stories address, amongst many things, thoughts on globalization and the international exchange of ideas. This topic probably sounds familiar—globalization is by no means a new concept—but do not mistake this for yet another over-philosophized rambling by a white man upon a pedestal as a self-proclaimed expert on how every person in the world thinks, feels, and behaves. To my relief, it’s quite the opposite. In relating us his journeys to India, Dicken presents himself in butyou’reaman as one person with stories that have left him with more questions than answers.

Though he peppers the show with anecdotes about men he came out to, Dicken’s stories mostly recount his relationship with Krishna, an Indian man with whom he fell madly in love. As their relationship blooms, Dicken confronts lapses in communication, mostly due to his lack of understanding of both Indian culture and, in the beginning, Hindi. Despite his extensive research on queer studies, none of his many courses prepared him for the possibility that queers in other cultures may not think about homosexuality in the same way—some may not even have words in their language to describe the highly intellectualized verbiage we may learn at an American liberal arts college.

As their love grows, so does Dicken’s ability to understand both Krishna’s homosexuality and the Indian gay rights movement. Even so, he struggles with many aspects of Indian culture, including Krishna’s decision to follow his family’s traditions and marry into a heterosexual life.

Dicken uses many theatrical devices to tell the stories of him and Krishna. Sometimes he reads words of advice from a self-help book for storytellers who want to explain a culture they don’t understand to an audience who understands even less. Occasionally he embodies queer figures from history. At moments he may stumble into a rabbit hole of ranting and philosophizing on gay activism as a global conversation. Or, simply, he tells and reenacts the stories.

Whichever method he chooses, butyou’reaman is an engaging deliberation on how these travels affected Dicken’s worldview—or, how to start asking questions about his own worldview. His philosophical rants sometimes ramble too long, which even he casually points out during the show, but they also feel like a necessary and personal view into how he tries processing all that he still doesn’t understand.

Also apparent is the team effort poured into this production. Katherine Mitchell’s lighting, Marc Jablonski’s sound, and Hannah Cook’s set converge seamlessly to support Dicken’s storytelling. The entire package sets up the audience for an enjoyably thoughtful show. You may not agree with all of his views and questions on globalization or identities, but, after watching the show you may need to question your own. This one man show is simply a gem not to be missed this Fringe season.