Behind the Wall - An Autism Performance Piece 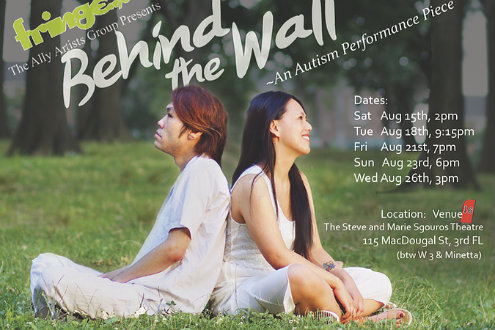 Andy Miyamotto and Joyce Lao in Behind the Wall.

BOTTOM LINE: Behind the Wall explores autism and sibling relationships in quick, occasionally intimate snapshots of dances and performance.

Sibling relationships are not always easy, especially when an older sibling ends up looking after a younger one. However, in Behind the Wall – An Autism Performance Piece, another layer of complexity gets added to the family dynamic: the younger sibling is autistic.

Behind the Wall exists as a hybrid form, somewhere between dance, a play, and performance art. The work is largely dance with one play-like scene featuring dialogue, and a few others featuring words here and there. Based on notes in the program, the show is based upon Lao’s relationship with her autistic brother, and this can be felt throughout the piece in its sincerity.

Behind the Wall begins with Andy (Andy Miyamotto) and Joyce (Joyce Lao) humming together pleasantly, in what feels like normalcy. This devolves when Andy becomes upset, and Joyce follows suit. Then Joyce returns, singing a song to a (potentially heavenly) figure, beseeching it for love and patience in her relationship with her brother. Much of the dancing is highly abstract, but still depicts compassion, power struggles, frustration, sharing, and caretaking. The wide range of stylistic choices, from post-modern to Asian-inspired, while often engaging, is occasionally distracting. The high contrast between the nine snapshot-style scenes detracts from a sense of continuity.

In the longest and most dialogue-heavy scene, the duo gets caught in the rain while playing in the park. After leaving Andy alone for a moment, Joyce discovers he has disappeared. While this is distressing for Joyce, Andy is recovered quickly thereafter, dampening the emotional response to this moment.

Then again, segments such as “Shadow Play,” in which the two move behind a back-lit sheet, are visually arresting. The intimacy and complexity of their relationship takes the foreground and this genuine, heartfelt vulnerability (which occurs a few times throughout Behind the Wall) breaks up the sense of overall lightness and brevity of the rest of the show. These moments feel the most rewarding, adding a sense of warmth.