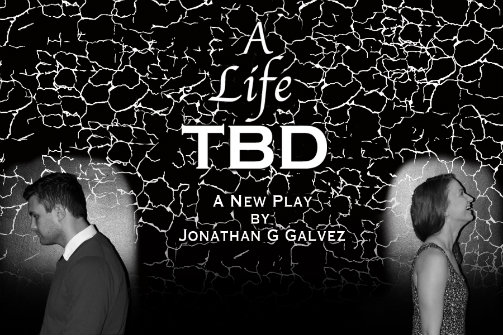 BOTTOM LINE: A Life TBD describes a relationship in three parts, with three different directors, adding up to an enjoyable evening of theater.

Romantic relationships, and particularly break-ups, are not a new topic for the stage. What’s different about Jonathan G. Galvez's A Life TBD is the fact that it’s broken into three parts, each done using a different director. Yet while A Life TBD is in distinct thirds, all three parts are about Mark (Matt Sydney) and Maggie (Julia Yarwood), and are placed together to tell the story “of two people at a crossroads.”

Part one, entitled “Countdown,” is directed by Paul Morris with assistant director Cassandra Lewis. It takes place in a bank where Mark is trying to close an account. We quickly realize that the bank is being held up, and Mark ends up with a gun to his head. What does he think of when his life is flashing before his eyes? He thinks of “her”—Maggie.

Part two, "Choice," is directed by Kristen Keim, and focuses mostly on the relationship between Maggie and her sister Penny. They've recently lost their mother, and as a result of many traumatic events, Maggie has given up her art. Maggie and Penny also learn that Maggie is very sick, with an illness from which she may never recover. (Mark appears only briefly in this part.)

In part three, “Connection.” directed by Prerna Bhatia, Mark decides that he has to see Maggie again, and finds her in the library where she now works. The scene is between the two of them, discussing their relationship. I found the third part to be the most compelling. Sydney and Yarwood have excellent chemistry and it is a pleasure to finally watch them together. There are no extraneous characters or unexplained back story in this third part, so we can watch two talented actors create a believable relationship.

The three parts are also somewhat distinct stylistically. The first part is rather abstract, with lots of darkness, where the ensemble works as a kind of conscience for Mark, in contrast to the real events happening in the light. The second part, with voiceovers and hallucinated characters interspersed with real events, is sort of a middle ground between the abstract nature of part one and the naturalism of part three. If the intent was  to use three different theatrical styles, this might have been clearer had a single director been in charge of the entire piece.

There are interesting ideas happening in the first two thirds of the play, but it seems unfocused. Is A Life TBD about Mark and Maggie’s relationship, or is it a play about Maggie? A Life TBD has the potential to be an intriguing play, and I would be interested to see a future incarnation with a more cohesive story. The cast and crew have done a lot of fine work contributing to an enjoyable evening of theater at the Fringe.