What Every Girl Should Know

By Monica Byrne; Directed by Jaki Bradley
Presented by the Order of St. Margaret Sanger 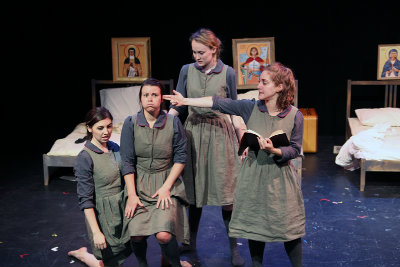 BOTTOM LINE: This well-crafted drama, performed by a strong cast, explores the hopes, fears, and passions of a group of powerless young women at a time of historic change.

There are a lot of shows presented each year at the Fringe, and some of them aren’t exactly ready for prime time. Audiences and critics may be inclined to go easy on these productions, figuring that the point, after all, is for artists to take risks less likely to be tolerated in a more mainstream environment. From time to time, however, the Fringe provides a venue for a small but fully formed play to have its moment in the spotlight. What Every Girl Should Know, an intelligent and poignant drama by Monica Byrne, is one of those, a modest but brilliant little gem.

What Every Girl Should Know takes its title from the famous (or notorious) newspaper column published in 1913 by Margaret Sanger, which offered plain-spoken advice on sex and health to young working-class women. The play is set a year later. Anne (Maggie Raymond), Lucy (Emma Meltzer), and Teresa (Danielle Beckmann) are teenagers living in a Catholic home for troubled girls, sorely in need of Mrs. Sanger’s brand of health education. Their adolescent sexual urges are in full bloom, but between their religious environment and their crushing poverty, they are powerless – sexually, socially, economically. Enter Joan (C.C. Kellogg), the daughter of a progressive activist. She wins the trust of her new roommates by sharing with them her expertise on Mrs. Sanger’s politics of self-determination for women. Lucy, the most innocent and imaginative of the group, is particularly inspired by these radical ideas, and begins writing stories about the things she might do if, indeed, she were able to forge her own path in life, unburdened by the morality of the time. Soon, all four girls are swept up into an imaginary world of adventure and romance, made possible by the genius and courage of Mrs. Sanger; to show their gratitude, the young women construct a shrine and declare her their patron saint.

The rituals Joan and her fellow proto-feminists enact in honor of their Saint Margaret range from sweet and charming to wild and ecstatic; you may be reminded of Abigail Williams and the girls of Salem in The Crucible. In both plays, a group of young women, living in a repressive religious community, are swept up into a performance of spiritual hysteria. While the witchcraft accusations turned out to be a web of lies, the crimes committed against Anne, Teresa, Lucy and Joan are all too real. What Every Girl Should Know gets progressively darker as the girls are drawn further and further into their dream world; their fantasies can protect them only so much against the reality of being poor, “wayward,” and female.

The ensemble cast works together like a string quartet, not a false note among them, thanks to the disciplined work of director Jaki Bradley. The action is punctuated with detours into music and movement (provided by Amanda Palmer and Jeff and Rick Kuperman, respectively), in which the fears and passions the girls can’t express in words (though they are a loquacious bunch) take over. Byrne’s script draws parallels between the plight of her pre-Jazz Age characters and current events without becoming a polemic; we care about the issue because we care about the four young women on stage, despite their ostensibly belonging to another era.

What Every Girl Should Know does have some weak points -- some of its movement sections are repetitive, and the script meanders a bit in the second half before building to a powerful ending -- but is so moving and so well-executed, down to the economical but perfectly rendered design, that it easily distinguishes itself among Fringe offerings. In fact, it’s just the caliber of small production that one hopes to find running off-off-Broadway. Hopefully the Order of St. Margaret Sanger will continue to spread the good news after this year’s Fringe Festival is in the history books.