This is a Play About Artists 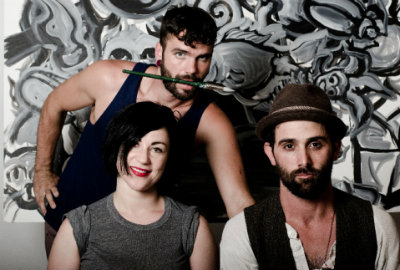 BOTTOM LINE: A performing artist questions inspiration and art while surrounded by her “ex-lovers”: a painter, a musician, and a poet, who all pine to be her muse.

This is a Play About Artists opens with a narrator (playwright Ginger Kearns) disrobing while reciting all the men she’s slept with. Indeed, much of the show is an exercise in nudity, exposing the truth behind artists’ inspirations for good or ill. Enter the poet, the narrator’s latest ex-lover, played by a mercurial Michael Kingsbaker. Donning a brown fedora, the poet orchestrates a series of games to manipulate the narrator into understanding why he fell out of love with her. All the while, the painter and musician (A.E. Kieren and Shane LaRue, respectively) engage their art, albeit silently, playing supportive parts whether as one of the narrator’s boyfriends or the wind. With performance pieces on caterpillars, strokes at the canvas, and 808 beats, the narrator oscillates between her present and past. As lights dim, the narrator grips the inconveniences of her past but trades nostalgia for nuance, ultimately clothing herself in certainty.

Artists is a play for creators and lovers. It was serendipitous that I sat next to a group of equally pining artists who shared Kearns’ artistic stop. The devastating effect of failed love for an artist is destruction, apparently, or worse yet, kitsch. The play is a woman’s attempt to forget her lover, a task made too difficult when he is still in her mind. It was powerful for the narrator to be surrounded by three talented men, lovers even. Though Kingsbaker’s poet was aptly antagonizing, interrupting the narrator’s process, the painter and musician enable her. This female empowerment is well-adjusted, given that it isn’t entirely one-sided. Kearns has written a woman both bold and vulnerable, who always says what’s on her mind even if it undoes her. The language in the piece is peculiar and forthcoming. While metaphor is abundant, the script doesn’t burden us with flowers, but tells it to us straight.  Proclamations like “Fact: you never loved me” are littered throughout to reconcile the narrator with her past. When “multidisciplinary” art is used it usually stops short, but Artists is true to form. Due to the abundance of stimuli I often found myself missing lines to look at Kiernen’s exquisite artwork.

The poet’s way of manipulating the narrator, and the narrator’s use of the painter and musician, really exhibit their function as constructs. The lack of real names and exposition leave room for the delectable conversations about art’s intersection with love. In the same ventriloquism scene, the poet and narrator recite quotes from famous authorities: “Find what you love and kill it.” “Art is never finished, just abandoned.” The latter quote by Da Vinci becomes the narrator’s emblem in the “second act.” She replaces her name with “art” and resolves her frustration with the poet—she is his art, abandoned. Whereas the poet enters on his own terms, asking for the narrator to reject the past, he exits on hers, employing nostalgia a little more. The play ultimately rests on the miracle of collaboration. In love and art we can never forecast what we give in the process, but can only be assured it is inevitable to do so.

(This is a Play About Artists plays at CSV Flamboyan, 107 Suffolk Street, as part of the NY International Fringe Festival, through August 18, 2013. Remaining performances are Wednesday August 14 at 10PM, Saturday August 17 at 5PM, and Sunday August 18 at 12PM. Tickets are $15 in advance, $18 at the door, and are available at fringenyc.org, or by calling 866.468.7619. For more information, visit www.theshelternyc.org. )