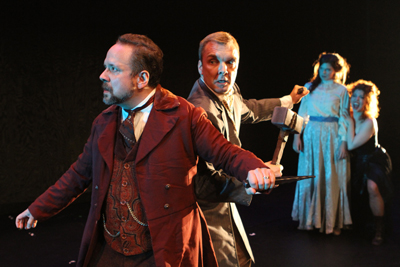 Here we have a mash-up of two tales in the public domain, Bram Stoker's Dracula and Shakespeare's A Midsummer Night's Dream. Writer/Director Neal J. Freeman (with Bloody Shakespeare producing) creates a piece that re-examines the traditional idea of the 'fairy;' he presents the plot of Midsummer as a bloodthirsty vampire escapade in line with the modern trick of inserting vampire plots in heretofore ridiculous ways (I'm looking at you, Abraham Lincoln Vampire Slayer movie).

However, unlike the Abraham Lincoln movie that made me want to demand a refund, I enjoyed this. It's easy to go disastrously wrong with pieces like these, they so easily move into the unsettling milieu of self-indulgent, over-worked fanfiction. To wit, if there's a formula that makes this kind of thing work, I think this show's discovered it: quick and simple. Freeman shows a remarkable amount of restraint in the assembly of the work and in his direction, the pace is swift, the run time is short, and the end result worth every joke that didn't make the cut. Less is More. Nobody took it or themselves too seriously, and that made a potentially eye-rolling/watch-checking gamble into a compelling and hilarious hour of theatre. It ain't art, but they know it, and in the best traditions of the Fringe they are just having fun. Consequently, I had fun with them.

Neal Freeman does phenomenal work here, walking the line between door-slamming farce and Shakespeare adroitly. Gags of all sorts abound, and if you are more familiar with Stoker's Dracula than I am, you may even get more guffaws; there were some jokes that went over my head due to my ignorance of some of the source material. The actors do a splendid job, with particular nods to Jan-Peter Pedross (Theseus), Greg Horton (Egeus), and Patrick Toon (Oberon) for thier part in the verbal slapstick and spit-takes. I also give special review notice to the costume design by Joey Haws (assisted by Emily Leimkuhler). The costumes balance character and fun appropriately, and are bedazzled or ascotted in all the right ways. Having worked the Fringe a number of times, I know the difficulties of designing for the festival, so hats off to this team.

In conclusion, The Nightmare Dream is a broad gesture in the simplest fashion that doesn't backfire. Considering the constraints of the NY Fringe Festival, it is a resounding success, and a reminder that the ancient tome of storytelling is best when it's fast, simple, and full of well-timed double-takes to the house.