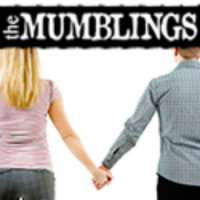 BOTTOM LINE: On the surface a romantic comedy, The Mumblings ultimately explores how we tend to make our lives an extended anecdote and what happens when the cracks in that foundation begin to show.

I would describe The Mumblings at this year’s Fringe Festival using a word that I very rarely use to describe a theatre production. That word is flawless. With a flawless script, flawless direction and flawless performances, The Mumblings has been, by far, my favorite Fringe show this year. This is not to say that it is for everyone. It involves some pretty controversial topics and its approach to some of them could definitely rub some audience members the wrong way.

The play centers on a very unlikely marriage between a gay children’s performer and an anthropologist who focuses on the sexual victimisation of women in Third World societies -- and how those women are actually comfortable with their positions in their cultures. That sentence should pretty much already enrage half of the audience, but in the deft hands of actors Keith Foster and Lynne Rosenberg it takes maybe five minutes to fall in love with these two and root for them to make it as a couple. In the remainder of the evening they tell us their story, playing multiple roles in both hilarious and heart-breaking ways.

Allen (Keith Foster) has a slightly precarious career. He writes children’s books and is a performer on a children’s television show. When he decides that he will not come out in his TV persona, it leads to a breakup with his boyfriend Frank. Allen was kicked out by his parents for being gay and potentially is a bit ashamed of his sexuality, although at the core I have to somewhat agree with the notion that a gay man’s entire life shouldn’t need to revolve around his sexuality. Since he can’t compartmentalize this part of himself, he decides instead to bury it by marrying a woman.

Jodie (Lynne Rosenberg), on the other hand, hasn’t been able to open up to a man since she was raped by her high school sweetheart Dan in front of all of their cheering friends. She’s unwittingly hidden from truly facing those demons by writing books about misogyny simply being a matter of misused narrative. When Allen proposes she says ‘ok’ and they get married despite pretty much everyone at the wedding erupting into mumbling when the preacher asks ‘if anyone has reason to believe this couple should not be wed...’.

All goes well for Allen and Jodie for several years until Jodie bumps into Dan on the street one day. Dan’s wife is dying of cancer and he pleads with Jodie to have Allen perform at his daughter’s third birthday party. Suffice to say things at the party get pretty awkward. Afterwards, Allen and Jodie have a fight from which they may never recover, during which the actors switch roles, playing each other to amazing dramatic effect. Jodie simply can’t go on like this, and Allen feels content to let things remain as they are. The lights fade out in uncertainty.

The above perhaps doesn’t do justice to the humor of the piece. While it definitely hits upon some heavy subjects, 90% of the show is simply laugh-out-loud funny. Most of this comes from the secondary characters that Foster and Rosenberg take on. There is a segment where Allen has a Craigslist casual encounter with ‘Julian’ who wants someone to ‘take his 9 ½ inches." Of course Julian turns out to be 22 years old, more like 5 inches, and is a coked-out adolescent who spouts ‘Allen I’m in love with you’ before passing out. There’s a good seven or eight other equally hilarious setups throughout. The Mumblings is a gem that I’d definitely give a repeat viewing to given the opportunity.