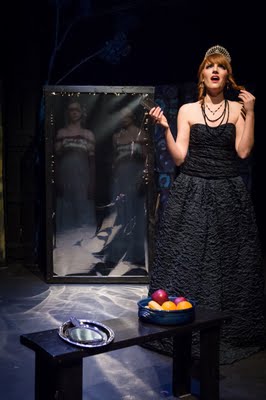 Jennifer Weiman in THE MAGIC MIRROR.

BOTTOM LINE: A limited production of contemporary opera based on classic material.

Juventas New Music Ensemble, a Boston-based company founded to support the music of composers under 35, presented an abridged version of 26-year old Polina Nazaykinskaya's The Magic Mirror as part of the New York International Fringe Festival. This new opera is based on Alexander Pushkin's The Tale of the Dead Princess and the Seven Knights.

The point of an opera is the music, and Nazaykinskaya's score is rich, intricate, and dynamic. The music is performed admirably by a professional seven-person orchestra and a full cast of trained, enthusiastic young singers. The piece opens with the melodious tones of Noune Karapetian's aria. Jennifer Weiman sings The Evil Queen with verve and thoughtful musicality. Erin Anderson's sweet soprano perfectly fits the beauty and kindness of the Princess, and as her prince, Oswaldo Iraheta's voice soars, though his performance is a bit much within the context of the rest of the cast. One of the highlights of the piece comes when the seven knights sing together as a chorus. It's refreshing to hear a contemporary opera sung around traditional operatic tales. The only real disappointment is the jarring differences in pacing inevitably left by the cuts made for time. The narrative, progressing at a lesuirely pace, suddenly jumps forward.

While the Juventas New Music Ensemble has done a stellar job promoting the work of over 90 composers in less than 8 years, and while it is wonderful to have this lush score brought to New York City, their production values fall short of their exemplary work in artist support. This production of The Magic Mirror is best in line with a workshop or a semi-staged reading. There are select costumes and props in place to indicate what is necessary for the audience, but the rest of the design is filled out with neutral black or white clothes and folding chairs. That isn't a fault by definition, it can be a wise choice and cleverly done, but the haphazard mis en scene of The Magic Mirror suffered from a ranging level of quality including a beautiful cloak and an ornate mirror at one end to a Party City crown and tikki torches at the other. I yearned for consistency -- a clear signal from the production to let me know what I could expect. But this was just a crack in the casing around a great piece.

Polina Nazaykinskaya's The Magic Mirror is an impressive, resonant opera, and I am glad to have seen it and to have been introduced to the wonderful work being done by Juventas New Music Ensemble.