The Drifts Live:  the novel onstage

Written and Performed by Thom Vernon 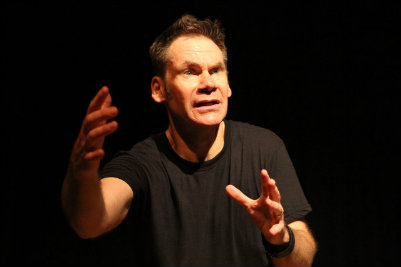 Thom Vernon in THE DRIFTS LIVE. Photo by Dixie Sheridan.

BOTTOM LINE: Passionate and captivating solo performance of an adaptation that is perhaps more suited to its original form.

Thom Vernon attacks without warning. As the lights come up on an empty space, Vernon is Charlie, a character distraught over his wife Julie’s desire to terminate her pregnancy. With his movement, he creates the front porch of a home. Charlie soon becomes Julie; the home soon becomes a town. The characters become violent; the town has its innocence blown away by the violent drifts of a storm. In the course of an hour, Vernon intertwines four lives as they explore hope and heartache through an oncoming blizzard in small town Arkansas.

Based on his novel The Drifts, The Drifts Live: the novel onstage utilizes a southern gothic tone to tell the complex stories of these characters suffering through issues of fidelity, gender politics, and sexual identity. Choosing to act as both author and solo performer (and I assume director since none is listed), Vernon vehemently recreates the lives of Charlie and Julie as well as the transgendered Dol, who is in love with Charlie, and the masculine Wilson, who can’t fight her love of Dol. The result is a compelling and breathless -- if often confusing -- performance piece.

And perhaps it’s the performance art aspect of the The Drifts Live that creates the biggest obstacle. Thrown headfirst into the action, you may feel as though you’re spending the better part of the hour playing catch up. From the beginning, the performance is so intense, there is often nowhere to build to, while that time may have been better spent on exposition. And while the body and voice work of each character becomes more identifiable toward the end, it is often easy to miss a shift in character.

But at the heart of the production are Vernon’s words, which possess that lovely southern poetry that plays so well with the accents and the locales. Though, as you hear them spoken by the character, you can’t help but feel that the words are a little too precious. Though poignant thoughts like, “We’re an insane country. We can’t escape the tragedy we created thinking we were doing good,” or “Suffering happens in plain sight,” are lovely, they often sound unnaturally poetic coming from these characters. I have a feeling the prose would feel more organic had I been reading the book instead of watching the performance.

But Vernon effectively builds the world around him, and the production’s greatest triumph is the establishment of place and mood. As his characters walk through the snow, you may find yourself getting the chills. Vernon’s physical work -- walking through snow, castrating oneself, fighting a calf, putting on a wig -- is impeccable and captivating.

While The Drifts Live: the novel onstage leaves me wanting to read the book, I wonder if the stage is the best place for it. But, if you do make the choice to experience this solo piece, you won’t be disappointed by Vernon’s passion for his creation.