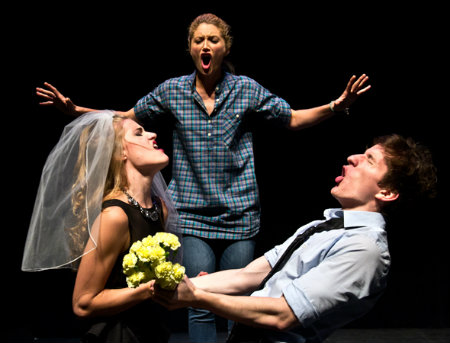 Chloe Williamson, Kristine Reese, and James Penca in SAVE THE DATE. Photo by: David Gordon.

BOTTOM LINE: An okay musical comedy about a gay and a girl on the wrong side of 25.

Codependent cohorts Emily (Kristine Reese) and Alex (Noah Zachary) have been BFFs since college, making one another laugh and feeding each other’s crazy. Now they are 27, everyone they know is getting married, and their friendship is put to the biggest test yet: Emily’s ex-who-got-away Michael (James Penca) is getting married and everyone’s invited to Santa Barbara for the wedding! Emily and Alex decide to cross the country with fellow New Yorker college chums cynical Jane (Barrett Wilbert Weed) and bubbly Tina (Victoria Britt). But Santa Barbara promises not only the marriage of Emily’s lost love, but also Alex and Jane’s epic exes Dylan and Ryan — EEK! Will friendship survive the trials of travel and the perils of the past revisited?

Save the Date is a very fun idea that could use tightening and more love. Even still, I imagine it will only ever appeal to a narrow demographic; it’s about messy, self-involved New York City twenty-somethings but without the irony that makes “Girls” successful or the glamour and wit that made “Sex and the City” a hit.

As is common in a festival, the show is done with barebones set and basic lighting, with a costume design that proved thoughtful and dynamic despite its simplicity. The production has a lot of problems with sound balance between the singers and the band and in microphone levels within the cast. The level of the singing is distinctly disparate, but everyone on stage gives their all. Kristine Reese and James Penca have particularly melodious voices that blend beautifully in their duets — a highlight of the musical. Despite the unevenness of the cast, though, there is a universally valiant effort from all the performers to make the material work. Are a lot of the jokes cheap? Yes. Is the music easy? Yes. Is it a good time? Kind of.

The show does improve quite a bit by the end, and I don’t mean the relief that it will soon be over. The pacing picks up, the action gets tighter, Noah Zachary delivers a wonderful comedic monologue, Kristine Reese’s eleven o’clock number “In My Head” is probably the best in the score, and then Chloe Williamson practically runs away with the show as the irresistibly charming Vikki. Williamson finally steps to the front, and every actor in the scene is doing their best, clearest work.