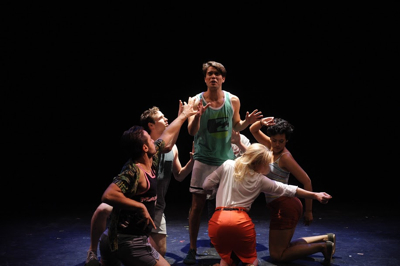 The cast of PENINSULA. Photo by Matt Dunivan.

BOTTOM LINE: A suspenseful and generally well-crafted play about class, sex, and identity presented in a clean and thoughtful production.

Let’s be frank, this production does not suffer from a lack of attractive performers and the play itself gives us sexual desire in all of its subtle and not-so-subtle varieties. In fact, there’s pretty much a type here to suit anyone’s taste: gym shorts, gym shoes, soccer players, swarthy hairy drug dealers, twinks, biceps, bulges, boobs, blonde bombshells, salt of the earth blue collar dudes, and fiery Latinas. If you have a fetish for any of that then you will leave with at least something that sticks with you. Yes, lust and desire are brimming here, but to reduce what is happening on stage to another play about sex with a cast of actors who obviously spend time in the gym would be to seriously undermine this exciting production.

The play centers on the young Brazilian Tiago (Josue Gutierrez Guerra) who is transplanted to northern Michigan for a summer of grueling and underpaid work in the fruit fields run by Bennett (John Zdrojeski). It is on the sandy beaches that he first meets the privileged Tommy (Kellan Peavy) and subsequently his boozy, lonely, and dare I say horny, mother known only as Mrs. Vaughn (Angela Atwood). We are also given glimpses into Tiago's past in Rio de Janeiro and the circumstances that led to him migrating to the land of opportunity. Who he left behind, Lily (Vanessa Bartlett) and Nelson (Marc Sinoway), and how he left them comes through bursts of juicy flashbacks that slowly shed new glimpses of light on how he will fair in this complicated landscape of deep class divides, deep blue waters, and even deeper sexual desires.

Wright obviously has an ear for dialogue. He has assembled a cast of characters that feel truthful, and he gives each performer more than enough to chew on. There are beautiful moments throughout, particularly between yes-man Tiago and the hot tempered Lily. The play and production rely heavily on asides that are poetic in nature, with the actors freezing in mid-motion around the speaker, but these often feel clunky and a tad trite. Think Zack Morris from TV's Saved by the Bell, but in verse. Director Nadia Foskolou relies on abstract movement to signify the outward expression of inner strife, but also to realistically suggest driving a car, eating, plucking eyebrows, swimming, knocking on doors, sexual acts, drinking, and a host of other common physical activities. Most of the movement feels both appropriately rehearsed and significantly awkward and though I learned to live with it over the course of the evening, should this play have a further life on stage it might benefit from the employment of a choreographer, someone to give more depth and dimension to both the mundane and heightened movement employed throughout. In general however, there is more than enough in the script and from this production, these performers, and this creative team to justify a future.