Written and Directed by Nat Cassidy 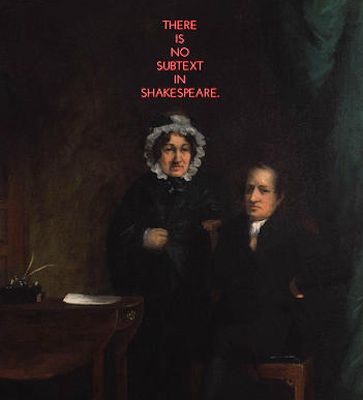 BOTTOM LINE: Borrowing from "old familiar" characters and some words from the big S-man himself, this new play reinvents and thrills.

Nat Cassidy is no stranger to Theasy. Luckily, we have seen and heard him before. As the director and playwright of Old Familiar Faces, Cassidy weaves an ornate tapestry full of little gems of searing humor, haunting violence, deep regret, and profound love. As the play unfolds you are constantly surprised how much in common you have with all the characters he has created.

It takes a bit of time to piece together the lives of the fascinating characters we meet. The non-linear structure hooks you in from the beginning, teasing you with bits and pieces of bait along the way. The play begins with a cast of four speaking very familiar phrases from our darling Mr. Shakespeare, setting the tone for the whole piece. We are introduced to the sister and brother literary team of Mary and Charles Lamb (Tandy Cronyn and Sam Tsoutsouvas) living in London in 1834. (The Lambs really did exist and wrote Tales from Shakespeare, adaptions of Shakespeare's works for children.) These scenes are perfectly and jarringly overlapped with scenes of Oliver and Lee (James Patrick Nelson and Marianne Miller), actors and lovers living in present day. As the play unfolds, we learn the trajectory of Lee and Oliver's obsessive love of Shakespeare and for each other. The two set of couples start to play a role in each others' lives and the echoes of mental illness, lost loves, and passion for language reveal what it is they all share.

In the ensemble piece, all actors are perfectly cast, fully committed, and utterly heartbreaking. Cassidy's language envelops you. At times, it is reminiscent of Christopher Durang and even Tony Kushner. One moment you are laughing hysterically and the next you are questioning everything you know. There are times when it seems the only words you can use are those that someone else wrote. But if you do that for too long, can you lose your identity? As Mary Lamb tells her brother, "Use your own words." Cassidy does and it is a language I want to hear again and again.