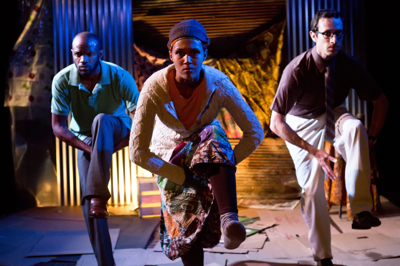 BOTTOM LINE: When the now terminally ill scholar Daweti exits her makeshift box to answer the shack door, she confronts truths she’d rather stay hidden. Ndebele Funeral centers on the emotional resolve of a learned woman, now beaten by fate, who navigates a controversial decision which has moving repercussions for her devoted friend Thabo and the white South African government official Jan.

This unequivocal gem from Zoey Martinson is a testament to percussion; a devised announcement that the heart’s beat is the greatest rhythm we possess or encounter. I felt utterly privileged to be in the opening night audience and only regret not sharing a drink at the after party. The story of an impoverished scholar now living in the shantytown of Soweto dying of AIDS reverberates at every turn. Whether the intent is to recite lyrical poetry or chant or stomp, the piece is electrifyingly percussive. Martinson plays Daweti, a Jo’burg intellectual who upon graduating finds out she has AIDS and relegates her life to Soweto. Enter Thabo (fabulously played by Yusef Miller), the devoted paragon who is too afraid to become a poet, come to save her. Accompanying their hilariously topical conversations about “Russ-i-yan” black squirrels that attack dogs is the beaten government official Jan (expertly portrayed by Jonathon David Martin).

The trio act in and off the page, becoming music and song and poetry. While the script is devastatingly direct, Martinson’s inclusion of dance and chant mystifies the social grounding of stunted Africa. And that is the best part: Awoye Timpo’s atmospheric direction thoroughly introduces us to the heart of Africa beyond what even the most sophisticated exposition can do. The play asks the eerie question: can a coffin be a home? And before you give a resounding “no,” Sduduzo Ka-Mbili and Cuereston Burge’s choreography will stomp you into submission. Part pragmatic, part elusive, the production’s choreography sets the proverbial tone of the show. Daweti’s resolve to make her coffin is stubbornly pessimistic as Thabo sees it, but he cannot denounce it as an option.

Ndebele Funeral incessantly introduces nuance — the biggest find being our perception of home. No exchange is more insightful than the scattered monologues of our three characters, of which Jan invigorates with the white Afrikaan experience. The remnants of Apartheid are disastrous for all; no one is saved from the surrounding pessimism of poverty. Daweti is just the only one to act.

Martinson’s script transports us, not just to South Africa, but to the effervescence of the culture. If you are not already running to the Teatro Circulo, I urge you to. This masterful piece is riddled with rhythmic thunder not from the choreographed steps or the inspired harmonies, but from the soul. When lights go out on Thabo and Daweti, the black washes over the audience like a cool rain. Be in that rain, folks, it’s that simple.