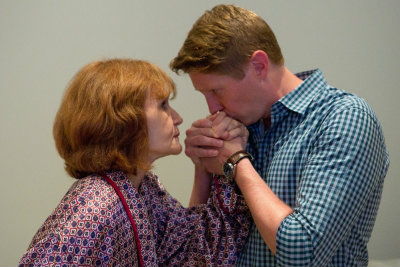 BOTTOM LINE: Milk for Mrs. Stone is a current account of a son, his mother, and their floundering family.

Right after being fired from the newspaper, Daniel (Justin Bohon), a middle-aged gay man in Kansas, finds out his immigrant Muslim partner has cancer. The surgery will cost $20,000, and so Daniel must turn to the only person in his life with that kind of cash: his mother. Unfortunately, it won’t be easy. Even greater than the obstacles of Daniel’s sexual orientation and his partner’s religion, Mrs. Stone (Colleen Wallnau) has had a stroke leaving her speech impaired to the point that neither Daniel nor his sister Jenny (Katherine Heller) can understand her — only Martha (Sophia Bishop), the live-in nurse, can translate. Mrs. Stone is resentful that Daniel doesn’t come around more often, resentful that Daniel is gay, but most of all resentful that she can no longer communicate with her children. Will Daniel be able to convince his staunch mother to give him the money he needs to save the man he loves? Meanwhile after a series of terrible relationships Jenny is ready to give up on men altogether, and the man Martha loves has just come back from a military tour and she needs the night off to see him.

This humorous but highly emotional play is concentrated in one single evening at Mrs. Stone’s, interspersed with flashbacks to their lives before the stroke, before Daniel came out, before his father passed away. Through this we are able to see the family’s evolution: once happy and successful, now struggling. But the struggle is not in vain — issues left buried in the past are now being sifted.

Written by Charles Gershman (Unbirth at PCTF), Milk for Mrs. Stone is a timely tale of family, sickness, and acceptance. The press release states, “Milk for Mrs. Stone explores the issues of health care in the US, anti-Muslim bias, the death of print journalism, and the changing status of queer unions.” The show is presented workshop-style with smooth, thoughtful staging by Eli Taylor.

The ensemble of actors work seamlessly together: Sophia Bishop adds humor as the wise nursemaid; Katherine Heller (Naked in a Fishbowl, FringeNYC) is emotive as desperate sister Jenny, second favorite child who never amounted to much; and Justin Bohon (The Book of Mormon) leads the cast with humanity, earnestness, and depth. But the show belongs to Colleen Wallnau (Crazy for You), portraying a sharp, vulnerable, dynamic woman hampered by a crippling stroke in the present and toiling under unspoken burdens in the past. Wallnau is funny, genuine, and distinct — you can’t take your eyes off her. There is an inherent challenge in the piece — the children can’t understand Mrs. Stone but the audience needs to be able to. This is handled well by the production.

(Milk for Mrs. Stone plays at the Robert Moss Theatre, 440 Lafayette Street below Astor Place, through August 22, 2013. Remaining performances are August 21st at 9:15PM and August 22nd at 5PM. Tickets are $15 in advance or $18 at the door and can be purchased at fringenyc.org.)