Lies We Tell Ourselves (when flamethrowers aren't enough)
By Josh Sohn; Directed by Jason Bruffy 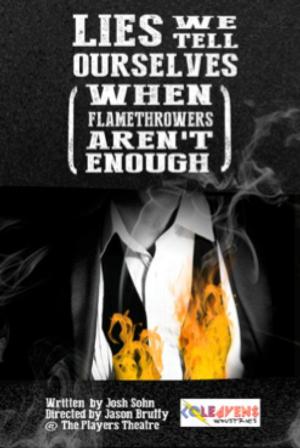 BOTTOM LINE: A late twenty-something muses over two recent girlfriends (and how each relationship went wrong) in this FringeNYC gem.

In Lies We Tell Ourselves, we first meet our protagonist Gabe (Rich Dreher) as he looks down at the ground from atop a windowsill; it’s the night of his best friend’s wedding. We abruptly shift to a space within Gabe’s subconscious where the majority of the action takes place. In this meta-region, he conjures said best friend (Parker, played by a charming Luke Forbes) and the two women he used to date. One’s named Willa (Melisa Breiner-Sanders) and she’s pretty sweet. The other is Meghan (Anne Marie Vick) and she’s pretty sassy. Oh, and Gabe happened to meet both ladies on the exact same day. Handsome and charismatic, at first glance you'd think he’d have no problem sticking with any girl he wants. But alas: he’s emotionally distant, having lived what we learn is a “pain-free” existence. Will Gabe be able to take any accountability for his failed relationships? Or will he kick Parker, Willa and Meghan out of his sub-conscious and ding-dong-ditch his best friend's wedding?

Due to Jason Bruffy’s consistently crisp and stylish direction, the journey to that answer is a gratifying one for the audience. Bruffy makes pitch perfect use of the Players Theatre space (the opening windowsill image and a stage fight True Romance-style are particularly impressive). Josh Sohn’s script is chock-full of lovely dramatic elements handled with tact by the cast. Despite a few bumps mid-way through (the Gabe-meets-Willa sequence is awkward but rings false; some cornball jokes about the Angelika cinema), Sohn picks things back up with an excellent final act that hits home for all the right reasons. There were twists and turns in the last twenty minutes that I never saw coming, ones that truly made me consider what I would do in many of these characters’ situations. Most remarkably, Sohn has dug into something quite beautiful in his exploration of how Person A in a relationship reacts to/deals with a traumatic event that Person B has gone through. Brenier-Sanders delivers a heartwrenching monologue, revealing something brutally intimate about her past. Dreher’s reaction is equally fascinating.

Sohn also provides a killer monologue for Meghan in which she takes charge and lets Gabe know how the rest of their evening will go down; Vick assuredly knocks it out of the park. Gordon Tashjian is a welcome presence, providing the perfect soundtrack to Gabe’s mind.

Is Lies perfectly executed? No. Is Sohn attempting to say something thought-provoking and important? Yes. As a playwright, his dramatic impulses are spot-on. And that’s what makes this play one of the best shows I’ve seen in the Fringe Festival this year.