I Am a Moon 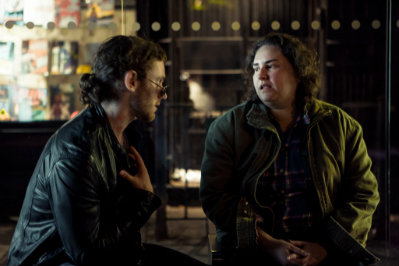 Seth Moore and Victoria Tucci in I AM A MOON. Photo by Yimeng Bal.

BOTTOM LINE: A purposefully anti-climactic examination of our ability to love our own wounds as we learn to heal.

Under the damaged surface of the moon, each member of that lost group we call humanity is struggling to connect and to heal. In Zhu Yi’s I Am a Moon, various characters with loose connections to one another give the audience a glimpse into their life, love, loss, and hope. Told with a mix of dialogue and primarily monologue, we meet each character one-by-one while the audio of some unknown trip to the moon frames the play. The trip in question does connect to the characters we meet, but the play largely highlights the distance we keep between each other and perhaps our own happiness.

Despite the ever-present pain these characters possess, I Am a Moon is darkly comedic, which plays best when the characters are allowed to interact. Those bits of connection between characters reveal more truth than the often too-long monologues that serve only to reinforce the heavy-handed theme of scars, bruises, and wounds. This is a play for the wounded, and the ever-present moon is an effective, if not obvious, reminder that we all possess this need to heal. Yi purposefully defies traditional plot structure in favor of an anti-climactic structure, which can leave the audience feeling a bit, perhaps like the characters, unfulfilled.

Notable performances in this play showcase the actors’ ability to keep the monologue-heavy show compelling. As Angela, a voyeuristic math major plagued by loneliness and weight issues, Victoria Tucci is a bright spot, especially, again, in her interactions with other characters. She possesses an endearing awkwardness that makes her the character we most root for. Unfortunately, the monologues she’s given concerning her weight result in little more than well-worn territory of childhood traumas and plus-sized clichés, though Tucci powers through nicely.

Ariel Estrada captivates as Jimmy, whose saccharine-sweet stories of falling in love, wearing glasses, and even watching pornography make him hands-down the most likeable character of the evening. Estrada navigates the potential trap of likability like an expert, and even this perhaps too-nice character survives as the most grounded and identifiable of the piece.

In I Am a Moon, Zhu Yi takes us to the moon’s orbit, but she’s never quite able to land. For a script that has been staged several times world-wide, one can only assume that other productions have been able to avoid the craters and deliver something truly luminous.