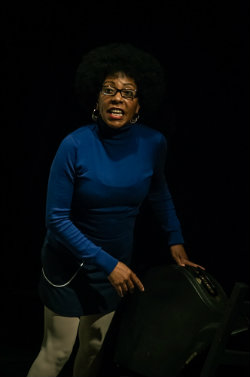 BOTTOM LINE: A charming one-woman show that looks back on the early ‘70s from a black female perspective.

Desiree is awkward, brainy and plays the French horn. Shauna is a professional cheerleader who refers to herself in the third person. They are sisters, and both are played by Amontaine Aurore in her solo show, Free Desiree, a smart and entertaining look at growing up African-American in the 1970s.

Each of these characters is on a mission. Deeply affected by the death of a fellow member of the school marching band, Desiree is trying to get the administration to address the tragedy in an assembly. Shauna is determined to break out of cheering and into movie stardom. Both sisters are inspired by the Black Power movement, despite having been raised in a mostly white neighborhood in Seattle. They struggle, both poignantly and hilariously, with the tension between how others see them and how they see themselves. Desiree wants to raise her classmates’ consciousness, but they’d rather she teach them her Soul Train dance moves. Shauna aspires to be the next Pam Grier, only to discover that Hollywood isn’t exactly looking for more black leading ladies.

With vocal work, physical gestures and minimal costume changes, Aurore manages to fully embody both sisters, their mother, and a classmate of Desiree's -- namely the only other black kid at school. It’s such a treat to see African-American women portrayed as funny, proud, and flawed, and reminds you just how rare that still is, all these years after Pam Grier and Soul Train. But don’t think of Free Desiree as a history lesson. It’s a celebration of culture, family, individuality...and the Funky Chicken. Don't know it? Desiree will show you.