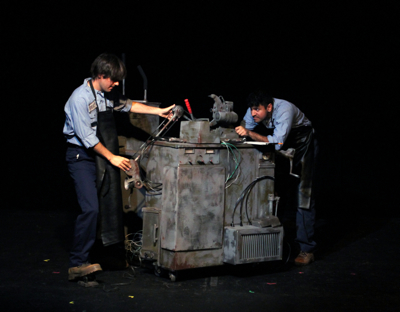 BOTTOM LINE: A darkly humorous and magical journey through the perils of smartphone manufacturing.

In the theatre, “deus ex machina” literally translates to “god from the machine.” It’s a plot device oft-used in classical plays: when everything in the story seems hopeless, a person or thing unexpectedly appears and solves everyone’s problems. The name derives from ancient theatre where the absolving god would be presented on stage riding a crane, riser, or other technology. In David Jacobi’s darkly humorous new play being presented as part of 2013 FringeNYC by Aporia Theater and Monster Down!, the god is removed from the situation and we simply get: Ex Machina.

The machine at the center of the play makes iPhones – or rather “super phones” as they’re referred to in this world. The program states that the smartphone factory on which Ex Machina is based is in Shenzhen, China. Smartly though, Jacobi doesn’t try and recreate Chinese factory working conditions on stage. Instead, he uses relatable characters and puts them in an ambiguously located factory, throwing out all geographically political fact-checking (a concept that may have served Mike Daisey well).

Mason (Danvir Grewal) has been doing this job for a long time. While clearly leading a miserable life, the fear of being unemployed keeps him from complaining about living and working conditions at the factory. The machine he works on is malfunctioning and takes a bite of his hand daily. He pays a quarter of a month’s salary on rent for what is essentially a dorm room in tight quarters with rotating roommates. The play opens with one of his roommates committing suicide by jumping out the window. The security guard (Michael Moran) scoops up the dead body and deposits it back into Mason’s room only to defiantly declare in the morning that the unfortunate roommate died in his sleep: “doing suicide” is not allowed here. Moran is hilarious as the straight-laced guard blindly following and barking orders out of fear of his superiors.

While Mason has successfully avoided any personal relationships with coworkers, Loomis, his replacement roommate (each roommate is played by Tommy Crawford), is eager and overly friendly – in a socially challenged way. Loomis speaks of friendships and unions, which Mason has avoided out of fear of upsetting the authorities. All the while, another character haunts the play that can only be described as a sort of pixie. Iris (Kim Blanck) is an omnipresent sprite akin to Tinker Bell dressed like an anime character – it is hard to tell when she is caring and when she is trying to cause mischief. Iris has a long history with Mason causing him both pleasure and pain. She has the ability to appear to whomever she chooses, and she now chooses Loomis to befriend and seduce.

Certainly, pressing thematic questions persist throughout the play: Will Mason agree to join a union to protect himself and his coworkers? Will Loomis expose the horrible working conditions to the world through his naiveté? Will the security guard cry? While Jacobi and director Sarah Wansley do an excellent job at touching upon such important themes (echoes of Waiting for Lefty), they keep the spirit of the piece fun and entertaining – specifically the karaoke rendering of Heart belted by Blanck. Grewal and Crawford’s dance sequence goes along with the number and is an instant crowd pleaser.

The ambiguous machine on stage appears to win the award for heaviest set piece in the Fringe. I don’t know where scenic designer Natalie Khuen found it or what the original intent of this defunct factory machinery was, but it’s perfect. It has the gritty industrial design of WALL-E living in an Apple world. A cartoonish “bells and whistles” sound design by Emily Jankowski remarkably brings it to life.

What the play is actually about leap frogs between friendship, unions, capitalism, and the need for nonsense. In the end Jacobi’s play may only reinforce some truths you know about the despicable conditions in the manufacturing world, but such truths have never quite been displayed in such a bizarre and enjoyable way.

(Ex Machina plays at Teatro Latea, 107 Suffolk Street between Rivington and Delancey Streets, as part of the New York International Fringe Festival, through August 23, 2013. Remaining performances are Thursday August 15 at 7PM, Saturday August 17 at 3:30PM, Wednesday August 21 at 3:30PM, and Friday August 23 at 9:30PM. Tickets are $15 in advance, $18 at the door, and are available at fringenyc.org, or by calling 866.468.7619. For more information, visit www.monsterdowntheatre.org.)