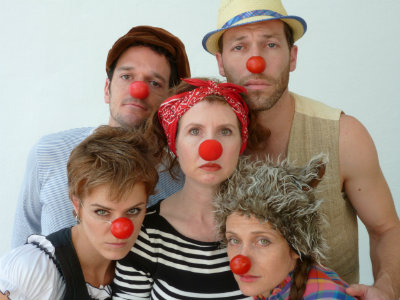 BOTTOM LINE: Sometimes the best way to deal with a failing economy amongst personal and societal strife is to make a joke of it.

I went into Clown Play anticipating a dark, disturbing and potentially thought-provoking evening. It’s a rare occasion when the subversion of expectation is a welcome delight and what I encountered was just that. Indeed the treatment of ‘the financial crisis, professional clowning, performance theory, suburban architecture, gun control, religion, murder, substance abuse and burglary’ did indeed touch up on all of those issues and more, but with a degree of levity that was refreshing in the current age of sometimes cult-like protest via social media.

Clown Play alternates between two pairs of drifters trying to find a home to squat in and the monologues of the house’s owner. Tommy and Nancy (Joel Reuben Ganz and Emily James) are running away from what seems to be a dark secret in Tommy’s past. Barry (Ryan Barry) stumbles into the house with a semi-automatic and titillates the house’s current clown-fetishist squatter, Elisa (a delightful Marissa Molnar, who is exceedingly reminiscent of Parker Posey). Both couples spar, get it on, and then bump into one another post-coitus. When Elisa decides to kill Tommy for being a clown-hater (a sequence that brought to mind everything from Rodney King up to the current Zimmerman story), Tommy comes out of the closet as being a clown himself. Maria (Carol Lee Sirugo) arrives home from the ‘big house’ after murdering her ex and is at first appalled by the invaders, but eventually allows them all to stay and teach her to be a clown as well. It’s a strangely uplifting tale of misfits finding each other in a pre-post-economic apocalypse, if you will.

Paul David Young’s script is exceedingly clever, with one absolutely killer monologue for Maria in which she records a Christmas CD of her year in review -- the story of her recovery from alcoholism, falling in love with a man who drives away her children, and the death of her mother from cancer (it’s comic). Robert Lutfy’s direction is equally impressive. I found myself picking out a few sequences I’d have liked to have worked on myself back in my university days. The whole cast is pitch-perfect once one becomes attuned to the style of the piece.

To sum up, this is exactly the kind of thing theatre-goers look forward to fringe festivals for: Daring, entertaining and ultimately non-mainstream fare. Be warned there is a huge amount of sexual content (pun intended potentially), the spoilers of which I can’t even type without blushing.