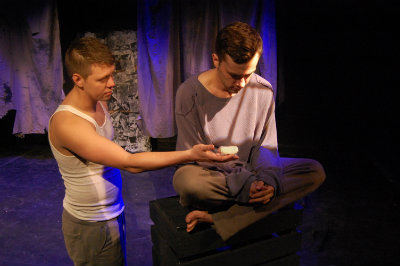 BOTTOM LINE: In The Orphan Policy trilogy, a post-revolution world sees its children as the only hope for continuing the coup, so they imprison them until they grow up “right.” This Thespis award-winning first installment centers on the dynamic friendship between a revolutionary and a recluse.

In this visually bare drama, an orphanage bathroom is the backdrop for two boys’ fiery exchanges. cal and grey is about the spark that ignites change. All U.S. children are wards of the state in the hopes of rehabilitating the population in the aftermath of a coup d’état. Cal is a “troublemaker,” yet consistent devotee of the warden and other officers. When he starts to talk to a political writer, however, he sees the revolution in a new light. Grey is the “mute” no one seems to know. Holing himself up in the bathroom window, it’s unclear whether he dreams of escape or death. When Cal enters the bathroom one night drenched in the fear of his recurring nightmare, he infringes on Grey’s peace by speaking to him, sparking a revolution of the heart.

The opposing friendship between Cal and Grey is somewhat familiar—a dash of old comedic opposites-attract mixed with progressive sexual tension. In spite of the fact that they like each other, both reject their feelings to keep more pain and confusion at bay. The two doubt that building a relationship with each other will greatly alter their circumstances, but they embark anyway for the sheer chance it will.

Visually, the production’s frayed curtains and cold crates underscore the exceptional isolation of these and thousands of other boys. A particularly deft design choice is to surround the bathroom with charred representations of childhood: burnt jump rope, balls, shovels, and insidious protest banners line the set with ominous reality. The production is heightened by how stark its elements are. The dialogue is pleasingly sparse, with Cal inciting most of the conversations. Still, we know he really gabs in fear of the silence. Grey, on the other hand, processes his trauma with physical deprivation: refusing to eat and hardly sleeping. Abandoned by a suicidal father, Grey remains distanced from others. The pain of the chase doesn’t faze Cal, however, who nearly stalks Grey every night. This leads to an inevitably sexual relationship between the two inmates, confusing and thrilling them at the same time. What follows is a dynamic discovery of true revolution where everything is upturned, including sexuality.

This is a surprising plot point given the extreme conditions already barring inhabitable life for these two boys; adding complicated sexuality seems too much. Yet, the inclusion of their love helps underscore the fact that life must be lived even in times of great pain, a position this production fully understands. Justin Blake Broido’s Cal is pleasantly direct and wretchedly vulnerable while Nick Martin’s Grey exemplifies aloofness. Madeleine Rose Parsigian’s direction is minimal like the set, only dealing with the most crucial emotions. There is absolutely no fluff; there are too many issues in this world for sugarcoating. The remounted production, with an enormously intriguing script from Sunglasses After Dark co-founder Becca Schlossberg, is a darker Hunger Games and even furthers the isolation felt in McCarthy’s The Road. As a first installment piece, cal and grey boldly introduces us to a world of deep, but reparable, suffering.

(cal and grey plays at Teatro Circulo, 64 East 4th Street between Bowery and 2nd Avenue, as part of the New York International Fringe Festival, through August 24, 2013. Remaining performances are Wednesday August 14 at 3:30PM, Thursday August 22 at 3PM, and Saturday August 24 at 7:45PM. Tickets are $15 in advance, $18 at the door, and are available at fringenyc.org, or by calling 866.468.7191. For more information, visit www.sunglassesafterdark.org.)