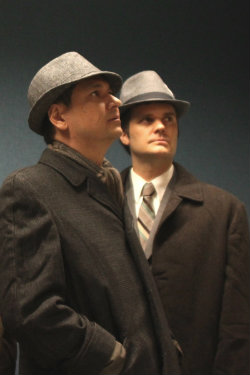 BOTTOM LINE: A harrowing day in winter for four Chicago businessmen of the 1960s.

As a native Chicagoan, I know all too well the perils of a winter in the Windy City. I endured the 2011 Chicago blizzard which saw 21 inches of snow. During the storm, news stations constantly made comparisons to the Chicago Blizzard of 1967, which saw 23 inches of snow and over 50 deaths. A storm of that magnitude was made far more difficult to bear in a world without computers, cell phones or Twitter. Jon Steinhagen is a veteran Chicago playwright who has attempted to encapsulate the storm in his new play Blizzard ‘67, which is being produced at the NYC Fringe by Playlab NYC, directed with nuanced minimalism by Kevin P. Hale.

Steinhagen has taken the route of covering the massive event by narrowing in on a group of four Chicago businessmen from the 1960s -- akin to Mad Men, only a little tamer. Henkin, Emery, Lanfield and Bell all live in the same Western suburb and work at the same office in Chicago’s loop. For this reason only they take part in a car pool. Their relationship with each other doesn’t go much deeper than that. We learn that they don’t even know each other’s first names. During the mild temperature of the calm before the storm, Steinhagen gives us an overview of who each of the men are at work. Henkin has received a promotion at the end of the work week and the others go home and vent their jealousy in different forms of depression.

The structure of the play incorporates a slow boil to the actual blizzard promised by the title. Steinhagen frequently makes use of direct address to the audience giving an in depth glimpse into each of the men’s fears and aspirations. The dramatic excitement of the play picks up when they are in immediate conflict with each other rather than the casual monologues delivered for the sake of the audience, as beautifully poetic as they can be. As they attempt to travel home in the car on the day of the blizzard there are inevitable complications leading to a shocking cliffhanger at the end of act one.

The situations each of these men find themselves in appear to be ripped from actual headlines from the blizzard. Steinhagen doesn’t allow for reconciliation with these career-focused drones of the corporate world. While they become closer by sharing this life altering experience, they don’t necessarily know each other or themselves any more. While the play has a grim view, it also has a truthful one avoiding any sensationalism.

Hale finds countless uses of a few chairs to create a multitude of locations. A spotlight does wonders to create the sensation of being confined to a car in the middle of a blizzard. Trevor Dallier’s sound design allows our imagination to fill out the harsh environmental aspects of the sparse design.

The cast does a formidable job at conveying the danger in each situation they encounter. William Franke as Henkin plays various roles effortlessly creating some of the most exciting interactions in the play. As Lanfield, John Pieza adds even more dimension than is on the surface to his gruff character.

Steinhagen gives us a worthy piece of journalistic playwriting tackling both the experiences of a 1960s blizzard and interoffice relationships of the era. There may be a more compact and high action version of the same story, but Steinhagen is clearly invested in painting a full portrait of each character in the play. His slick dialogue is laden with profanity and jabs making the moments of exposition more entertaining to take in.

If you ask anyone who lived in Chicago in 1967 you’ll get a different story about the blizzard, much the same as with Hurricane Sandy for New Yorkers. Amid the horrors there are often more positive occurrences showing just how powerful human nature is in the face of natural disasters. Steinhagen has chosen to ask hard, honest questions about the morality of those instances which toggle the line between cowardice and heroism -- whether or not we like the answers.