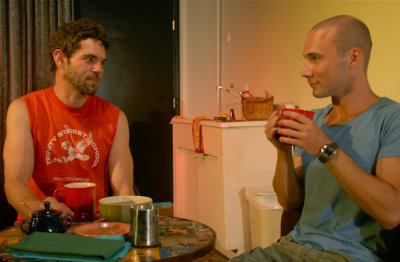 BOTTOM LINE: This darkly comic, sexually-charged thriller from a freshman playwright shows its strings throughout but still packs a classicly chilling punch.

With the East Coast premiere of Sean Galuszka’s psychological thriller Poison Apple, we get a contemporary New York play from California theatremakers 134 West -- just another of the varied backstories to each production at the New York International Fringe Festival. Directed by Susan Lambert, this debut production by New York-state native Galuszka has the authenticity of a strange New York encounter. However, Galuszka’s Hell’s Kitchen setting is not only representative of an iconic New York apartment but serves as a tinder box for his two characters Paul (Christopher Sams) and Jerry (Galuszka) to inhabit throughout an intense, if not overly macabre, 95 minutes.

Lambert opens the play with a long rendition of a slightly obscure version of “Some Day My Prince Will Come” from Snow White, one of many references to the allegorical namesake of the play Galuszka peppers (with the top off the shaker) throughout. After a prank pretending to be the police, Jerry manuevers his way into Paul’s apartment. A stranger to Paul -- who is armed with cleaning gloves and a bottle of watered down bleach -- Jerry looks like a worn character asking for money at Port Authority complete with an oversized backpack. Jerry’s demeanor and tired look plays into Galuszka’s overriding device of appearance versus reality in the play. It turns out Jerry is just there to see his best friend, a young woman with relationship issues, who happens to be Paul’s roommate. The situation grows eerie when she is unable to be reached by Jerry.

Paul and Jerry are homosexuals and it’s one of the loveliest things about the play just how little of a statement is being made about that fact on stage, and rather is used as more of a Hitchockian plot device. It allows an attraction between the two characters which builds a tension that is both sexual and off-center. Galuszka does an admirable job creating a constant atmosphere that something is severely wrong, but not always knowing exactly why. He puts the audience in the proverbial frog-boiling pot, which is made reference to more than once by Paul.

One of the more remarkable elements to the play is just how much the audience can predict what is going to happen in the play, yet questions itself more than once. Lambert’s direction is perhaps overly straightforward in that the ending is being played almost constantly throughout. Scenes of Jerry and Paul having tea and flirting casually come off creepy rather than allowing the audience to get comfortable before certain revleations are made. The dialogue attempts to remain inconsequential despite a couple glaring plot setups. Lambert also makes an unfortunate mistake of staging her actors behind furniture through much of the play, hampering our ability to connect humanly to Jerry and Paul.

All the while, I’ll still admit that Galuszka got my heart pounding more than once. He tells us that the story is based on true events in New York City. This wasn’t a reference check I was willing to embark on sitting in my apartment alone later that evening after seeing this darkly comic “B movie” of a play.

(Poison Apple plays at the Connelly Theatre, 220 East 4th Street, through August 19, 2012. Remaining performances are August 19th at 12PM. Tickets are $15 in advance and $18 at the door. To purchase tickets visit fringenyc.org.)