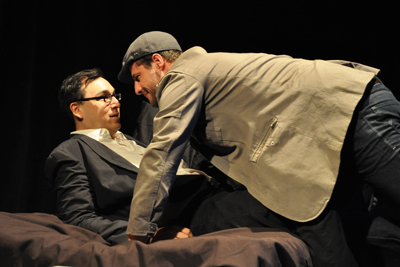 BOTTOM LINE: An intiguing, important and insightful story about a high-profile murder in the Los Angeles gay community.

In the opening moments of Pieces, the new play by Chris Phillips, the character Shane Holloway (Chris Salvatore) comes out on stage covered in blood with the sounds of police sirens surrounding him and puts his gory palms in the air. The next few scenes establish that the play is something of a courtroom drama (or perhaps I should say “legal drama,” as none of the scenes actually unfold in the court). Shane has turned himself in for the murder of a wealthy older man with whom he’s been living (and freeloading on travel and parties and drugs in exchange for sex) for six years. We learn that his defense attorney, Rory Dennis (Jonathan Gibson), is also gay and that the district attorney, Mary Hamilton (Nina Millin), doesn’t want a trial for Shane because she expects such a high profile case to be nothing but bad publicity for the gay community.

Midway through the first act, I thought the story had been established and that the play I was watching was a pretty standard legal drama that happened to be about gay people. But then something happened — namely, Gibson delivered a scathing rant about the awful ways that gay men treat each other with incredible emotional intensity and physicality. The show took on new complexity, the stakes were significantly raised, and the entire audience was riveted.

One of the essential pieces of Pieces comes in the performances, all five of which are rather powerful. Each role presents many challenging acting moments and, with a near-constant blurring of the lines between professional and personal interactions between characters, each performer has his or her moments of extreme and organic intensity. Gibson, in particular, flies down a number of emotional chutes, each time with bravado and believability. Near the end, Paolo Andino (whose incredibly complex character, Jonathan Nielson, served as Shane’s entry into the world of borderline prostitution but also tried to get him out) gave me the chills with his physical delivery of an important epiphany mid-physical fight (this is some serious acting, folks).

Pieces tackles and examines what feels like the making for a new wave of gay activism. With homophobia on the decline and an undeniable cultural and political trend favoring the acceptance of gay people in America, Philips turns his scope within the community and the particular brand of superficiality that often plagues it. But he thankfully avoids coming across as overly cynical; In fact, in Pieces, cynicism about the gay community turns into an equally destructive monster. The ultimate message is one of hope — but in a problematic, complex and realistic way.

You only have one more chance to see Pieces in the Fringe (though I sincerely hope this isn't the last we see of it). Grab your tissues, take a deep breath, and help fill that theatre.

(Pieces plays as part of the New York International Fringe Festival at Cherry Lane Theatre, 38 Commerce Street, through August 19, 2012. Remaining performance is on Sunday, August 19 at 8PM. Tickets are $15 in advance, $18 at the door. To purchase tickets, visit fringenyc.org. For more show information, visit piecestheplay.com.)