By Meghan Gambling and Sascha Alexander; Directed by Elissa Weinzimmer 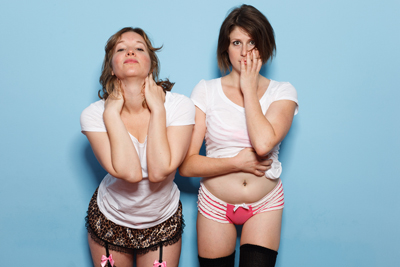 BOTTOM LINE: This double dose of solo shows explore issues relating to sexuality and body image -- by blending humor and drama, Meghan Gambling and Sascha Alexander create works that are both moving and yet, hilarious.

It's no secret that it's not easy being a woman in American society, where a female's sexuality and attractiveness are constantly being criticized and questioned, and this is the idea at the heart of Naked and Crazy. The promotional materials for the show may be misleading, because rather than seeing two young women in a show together, we see a two solo shows in which each woman tells stories relating to their sexuality and body (hence the word naked referenced in the title. There's no actual nudity here, but Alexander certainly does show plenty of skin.)

First up is Meghan Gambling, who tells the story of coming of age while living in a trailer park town in North Carolina. Gambling adopts an exaggerated southern twang as she lampoons her clueless and sometimes trashy peers as she retells the story of her first experiences with sexuality. Gambling evokes much laughter from her tales, which include having her first boyfriend perform cunninlingus on her at the age of 13, while she lays on the gravestone of a relative behind the church she attends every Sunday. She later describes her nutty grandmother who constantly accuses her of being a lesbian as the answer to why she doesn't have a boyfriend. Her tales are interspersed with her humorous musical numbers, including one in which she believes that she lost her "virginity" when she had a bicycle accident. Finally, when she cuts to the present day, she explores her first real relationship at 29 and how her cats keep sabotaging her date. Gambling shows a gift for humor and her fondness for self deprecation makes her tales appealing. Other than one slightly lagging musical number, Gambling's show is streamlined and well timed, holding the audience's full attention with her engrossing performance.

Second is Sascha Alexander who tells her tale of developing anorexia and body dysmorphic disorder as a side effect of being an actress in an industry where her body is constantly scrutinized. Alexander tries to learn to love her body (even if her tummy pokes out) by undergoing therapy, reading a therapist-suggested book, and taking stripper classes. Somehow by learning to work the pole and take off her top in a seductive manner, Alexander learns to appreciate her flesh as is. Alexander blends both drama and comedy, making fun of the characters she crosses paths with (including her foul mouthed, overtly sexual stripping instructor) and giving sincere depictions of struggling in an industry that teaches that skinnier is always better, The success of Alexander's show can be credited to her obvious gift for dramatic acting. Alexander believably embodies the characters she takes on, rather than reducing the characters to over-the-top parodies. Alexander's ruminations on how the media and the entertainment industry encourage negative body images are not new revelations, but her material feels fresh and engaging due to her earnest, emotive performance that renders every line heartfelt. Alexander's struggle to accept herself and her body is surely one that plenty of women can relate to, and I found myself holding back tears during her most climactic moments. Alexander succeeds in creating a show that is both immensely funny and yet sincere and moving.

As a whole the double offering of these two solo shows offers an insightful and hilarious look at what it means to be a young woman in today's world.

(Naked and Crazy plays at the White Box at 440 Studios, 440 Lafayette, through August 18, 2012. Remaining performances are August 18th at 6PM. Tickets are $15 in advance and $18 at the door. To purchase tickets visit fringenyc.org. For more show info visit nakedandcrazy2012.com.)