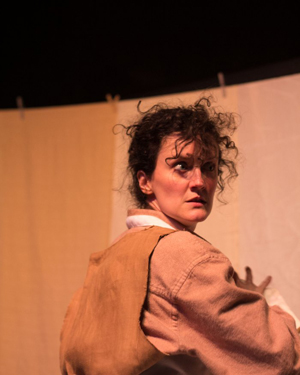 BOTTOM LINE: Erin Layton succeeds in giving a voice to the women who spent their lives suffering at the Magdalene Laundries in Ireland, her gift as an actor and writer creates a powerful exploration of the stories of those who existed in the walls of this prison.

Erin Layton's one woman show tells the story of the Magdalene Laundries in Ireland, which were run and supervised by Irish Catholic nuns. Within these laundries the "fallen" girls and women of Ireland were sequestered away from society. These included the mentally and physically disabled, unwed mothers, orphans, and prostitutes. By spending their days scrubbing dirty linen, praying, and confessing their sins to a priest they were supposed to be cleaning their souls and washing away their sins.

Layton shows great talent as an actor as she convicingly switches from character to character, covering all ages and genders. She portrays a young girl full of hope to one day become a nun, prostitutes who are cruelly beaten, unwed mothers whose infants are taken from them forever, mentally disabled children, the children abandoned by their poor families, the self-righteous mother superior and the priest who takes the women's confessions. Layton also portrays two boys who watch the girls: one who spits on them with his friends and plots to shoot them with a BB gun, and another who considers the girls to be "cute" and feels pity for them. This same boy later grows up to buy the property and unearths the dark secret of the many deaths hidden by the nuns.

The abuse and violence the girls suffered is mostly only lightly touched upon, shown most overtly through a prostitute who describes the brutal beating and cleansing she received as a means of wiping away her terrible sins. A bloody linen later appears in the laundry buckets, hinting at the brutality happening around the women. By not focusing solely on the abuse and violence, Layton shows how the women find hope even in their sad circumstances. Overall, Layton's talent as an actor enables here to give a voice to this piece of history not often explored or discussed.

(Magdalen plays at the Gene Frankel Theatre, 24 Bond Street, through August 24, 2012. The remaining performance is August 24th at 9PM. Tickets are $15 in advance and $18 at the door. To purchase tickets visit fringenyc.org. For more show info visit magdalentheplay.wordpress.com.)