Tickets are $15-$18 and are available at www.fringenyc.org. 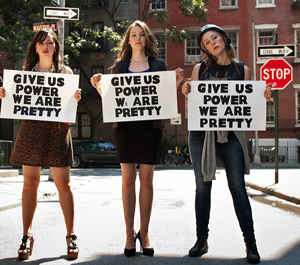 Tara Schuster, Alice Winslow, and Alexandra Panzer in I <3 REVOLUTION.

Upon arriving to a performance of I <3 Revolution, I am approached by a bubbly, ponytailed girl with a pink clipboard in hand. "Have you checked in yet?" she asks, and then asks me for my name and whether I prefer "whole milk or 2%." When I choose the latter she replies by asking "Oh, so do you consider yourself part of the 2% then?" Shortly thereafter, I am startled to find the recognizable actor Chris Lowell (who up until recently played Dell on Private Practice) picking up my dropped water bottle and repeatedly patting me on the leg and asking me if I'm okay. This sort of disorienting audience interaction, combined with Occupy Wallstreet-referencing jokes make up the bulk of the laugh-inducing material comprising I <3 Revolution, a strange mish-mash of intentionally misguided commentary about trying to stage a revolution in light of a culture that has lobotomized us with pop culture and social media. During one of the more articulate moments in the play, the three women in charge of this revolution/audience takeover bring up an overhead projection of Yelp reviews of Occupy Wallstreet. One clueless real life commenter noted his joy at the group being evicted from the park as it made it easier for him to do his shopping at nearby Century 21.

Shortly after the start of I <3 Revolution, we are informed that we are being held hostage by the three women in charge: Alexandra (Alexandra Panzer), Tara (Tara Schuster), and Alice (Alice Winslow). Assisting them is Michael (Chris Lowell), an ambivalent-seeming young man who has little interest in helping start a revolution and would rather jumpstart his acting career. His completely deadpan readings of lines intended to spark excitement are quite humorous, as is his performance of a monologue from Death of a Salesman. The three clueless women pull nail guns and cans of whipped cream out, telling the audience they are not allowed to leave under any circumstances, but that it's okay because Stockholm Syndrome will eventually kick in. This revolution is disorganized and misguided, and the three girls often end up arguing with each other and getting lost in tangents, trying to garner audience support to win their arguments. The point of the girls' revolution is not always clear, but it involves taking down celebrities by doing such things as switching Justin Bieber's hair gel with rubber cement and worshipping a feminist professor at Brown University.

I <3 Revolution was originally created by Panzer, Schuster, and Winslow while they were studying at Brown in 2008. Angered by misogyny on campus and what they saw to be male domination in theater, the three women decided to create their own show combining everything they needed to see on a stage. Their resulting material seems to be a parody of misguided desires for revolution, as the girls make such comedic statements as wanting to repave the roads to make them less patriarchal. Other zany events that unfold before the play's end include: a sacred baptismal milk bath, a coordinated dance number, and an absurd discussion as to whether or not it is okay to use the word 'panties.' The message/political commentary at the heart of the play could be stronger, but the play nonetheless is ceaselessly funny with endless energy. I'd guess not a single audience member wasn't won over by the comedic skill of the four gifted performers.

( I <3 Revolution plays at the Living Theater, 21 Clinton Street, through August 26, 2011. Remaining Performances are August 22nd at 7PM and August 26th at 12PM. Tickets are $15 in advance or $18 at the box office and are available at www.fringenyc.org. For more show info visit ladiesoftherevolution.com.)